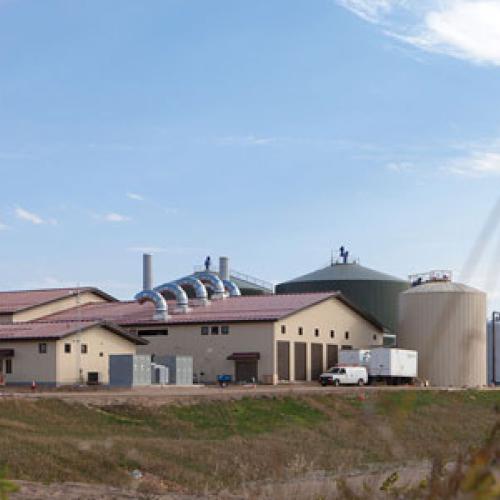 The Hometown BioEnergy anaerobic digester on the south edge of LeSueur, Minn., is the largest system of its type in the U.S., rated at 8 MW of electrical power from food processing and agricultural waste. Kelsey Dillon’s description of the construction schedule at Hometown BioEnergy LLC as “aggressive” is an understatement.

The project broke ground in December 2012, in the midst of a Minnesota winter, and was completed one year later, in the middle of a very cold December. “We had a very aggressive construction schedule. We had to work long hours and weekend schedules to get it done,” the vice president of bioenergy for Avant Energy Inc. explains. “We pushed hard because we qualified for a 1603 grant [under the Recovery Act] and we had to be complete by the end of this year.” The grant isn’t finalized yet, she adds, but the developers hope to receive between $8 million and $9 million to help with the overall $45 million project cost.

Minneapolis-based Avant manages the day-to-day operations for the Minnesota Municipal Power Agency, a group of 12 municipal electric utilities formed in the 1990s. Avant began looking at all types of biomass technologies in 2009, ultimately settling upon anaerobic digesters (AD) and Denmark-based Xergi A/S as the technology provider. Barr Engineering was the engineer for the project. The renewable power from the Hometown facility will help MMPA meet its renewable portfolio goal of 17 percent by 2016, adding to the wind generation already in service. Minnesota’s renewable portfolio standard calls for 25 percent renewable power by 2025.

The Hometown BioEnergy anaerobic digester on the south edge of LeSueur, Minn., is the largest system of its type in the U.S., Dillon says, rated at 8 MW of electrical power from food processing and agricultural waste. To meet the startup goal, construction was first completed on the receiving bays and AD so that dairy manure could be delivered starting in October to get the unit going. “Dairy manure is very good for startup of these kinds of facilities,” she explains, “because as a ruminant, a dairy cow has the kind of microbes in its stomach that you need in a digester. We also have other vegetable processing residues we’re processing, primarily sweet corn silage from the canneries.” With LeSueur the home of the Green Giant Co., canneries processing sweet corn and peas have long been part of the local landscape, including the piles of silage requiring disposal. The facility can handle 45,000 dry tons of food-processing wastes and animal manures annually, trucked in from a 60-mile radius around the plant that sits about 60 miles southwest of Minneapolis and St. Paul.

The facility can process about two trucks per hour, with most feedstocks coming in at roughly 10 to 45 percent solids. Trucks dump their loads of solid biomass into a pit in the receiving hall where an automated crane moves the material into the processing area for size reduction with a shredder and mixing. Then, it gets conveyed into the feeding modules. Liquids are dumped into concrete tanks and also pumped into the feeding modules where the feedstocks are mixed and heated before being loaded into the digesters. The feeding modules are a unique part of the AD design from the biogas technology provider, Xergi, Dillon says. Xergi was chosen primarily because of its experience in designing plants utilizing multiple types of feedstocks. Xergi also supplied the control system for the plant.

Hometown BioEnergy has two 1.6 million gallon digesters with center-mounted agitators slowly stirring the tank, with an average residence time ranging between 30 and 45 days in the continuous process. “You are always pulling material out and [the digester] is always full,” Dillon explains. Hydrogen sulfide is first cleaned out of the biogas, which is then stored in domes. “One of the reasons we’re very interested in biomass plants, and anaerobic digesters in particular, is that it enables us to have a renewable resource for MMPA that is dispatchable,” Dillon says. “The domes enable us to store about 12 hours of gas so we can produce electricity in the daytime when the power has more value.”

The physical power generated in the four 2-MW Cummins gensets goes to LeSueur, population 4,000, connecting directly to the city’s distribution system. “There’s a lot of efficiency in just using the power locally,” Dillon says, “rather than putting it out on the large transmission lines.” The Cummins engines can handle the raw gas from the digester, although the facility opted to clean out the hydrogen sulfide to eliminate its corrosive effects. The gensets have the flexibility to accommodate methane levels between 50 and 60 percent, without the carbon dioxide being removed. As important to the facility design, Dillon explains, is the Cummins system’s heat recovery capability. “We use the jacket water heat from the engines to bring the biomass up to temperature. We also recover heat from the exhaust to dry the solid fuel byproduct on the backend of the process.”

The facility expects to produce about 7,000 tons of solid fuel that will be used for biomass power or as a renewable offset in coal generation. The liquid byproduct stream will be stored onsite for land application in the spring and fall as a fertilizer. “The liquid stream has a very high fertilizer value,” she adds. “It’s quite a bit better than the manure that would have otherwise been land applied that we are processing in the plant.”

Neighbors in the Valley

As Hometown BioEnergy ramps up its feedstock acquisition and finishes filling the digesters, the neighbors are getting a good sense of what having an AD power facility next door is like. With no examples nearby and the technology provider having most of its facilities in Denmark and Germany, there was nothing to show people. “We spent a lot of time working with community leaders and state regulators to get them comfortable with the type of facility, the type of technology,” Dillon says. Indeed, the facility completed an Environmental Assessment Worksheet and the Minnesota Pollution Control Agency did not require the facility to undergo a state Environmental Impact Statement.

“Overall, I think it went well, and people today, now that the facility is up and running, are seeing that it’s not disruptive,” Dillon says. “Visually, it’s quite in keeping with the agricultural landscape. As you’re driving down the road, it almost looks like another farm structure you would see around LeSueur.”

Concerns about potential smells have been allayed as well. The air in the fully-enclosed receiving area is routed through a biofilter comprised of layers of wood chips and other organic material. Microbes in the biofilter eat the volatile organic compounds that cause odors. “With that biofilter, odors haven’t been perceptible whatsoever on the boundary lines of the property,” Dillon says. “And it’s not too bad in the building. Once in a while it smells like silage, but it is an ag processing facility.”

When asked about the payback potential for this sort of facility, Dillon explains that as a municipal power provider, the concern isn’t the return on investment. “MMPA is trying to provide competitively priced electricity on the wholesale level to its member communities, and comply with the renewable requirement.” At $50 per megawatt hour, Dillon says the biogas power is competitive with wind. “One of the reasons it’s competitive is that you can control the time of day you are producing the power to the higher value hours.”