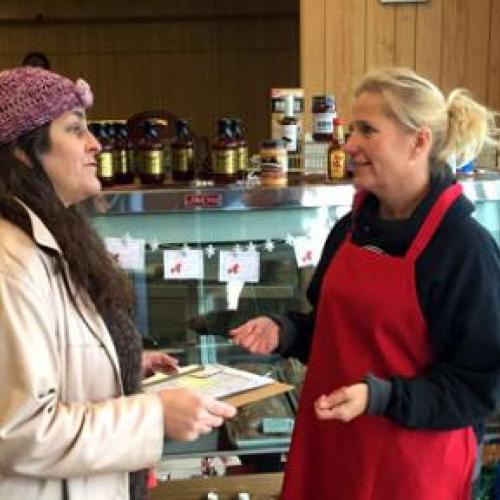 Over the past year, Metro CERT has supported the energy conservation and development aspect of the Chisago Lakes Area’s community revitalization plan for their entry into the America’s Best Communities (ABC) competition they have been participating in for nearly two years. The Chisago Lakes Area includes the communities of Chisago, Lindstrom, Center City, Shafer, and Taylors Falls.

In the end, they were one of eight communities (out of 350 originally) with a chance to receive one, two, or three million dollars. On April 19th the winners were announced and sadly, Chisago Lakes didn’t win. Though they are still winners in our eyes!

Metro CERT supported the energy conservation and development plan in a number of different ways. In December 2015 we provided a $4,000 Metro CERT Seed Grant to support the launch of the Clean Energy Hub. In the spring of 2016 we chose that project to do a deep dive of assistance through our Metro CERT Accelerator with our staff and resources. We conducted outreach and engagement to residents, businesses, and institutions to get an energy assessment and take action throughout Chisago County, with a commitment to focus in the Chisago Lakes Area until the competition was over.

Some of the activities we coordinated included:

The Clean Energy Hub has a total of 321 clean energy projects completed, committed, or in process! Those projects contribute $4,282,297 in total utility incentives, tax credits, and lifetime energy savings for project owners.

During the effort the county also made some key decisions to help move their community to a clean energy focal point, including adopting a PACE (Property Assessed Clean Energy) joint powers agreement with the Saint Paul Port Authority, and setting the standards to allow and invite in solar development in a big way. As part of embracing solar development they have applied to the Department of Energy’s SolSmart program.

As a recent Star Tribune article states, the solar story in the Chisago Lakes Area started much earlier with the Middle School. Teacher Pat Collins and middle school students asked for permission to raise money to put a solar array on the school. One of the sources of funding for that solar system came from a $5,000 Metro CERT Seed Grant to support Project Independence in 2009. Project Independence is a 44 panel solar array on the Chisago Lakes Middle School in Lindstrom. At the time, Pat Collins referred to the CERTs funding as a “hope grant” because it proved to people within the school district that they may be able to raise the money necessary and make this a reality.

Currently, Chisago County has enough solar capacity to power 20,000 homes. That is enough to power all the homes in the county. In addition to a number of homeowners and businesses adding solar arrays, there were a number of very large-scale utility solar installations including a community solar garden hosted by Eichten’s Cheese and Bison Farm. The Star Tribune shares the story in this article.