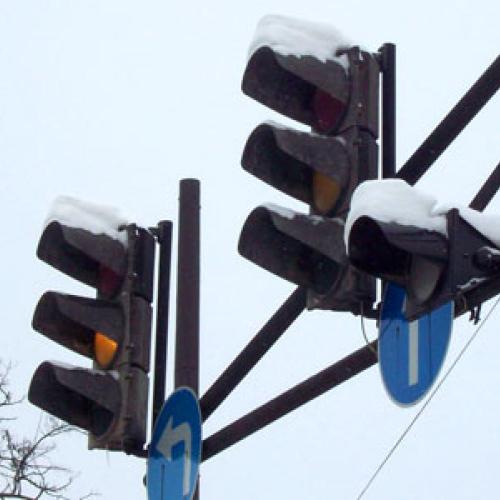 I heard a question recently about LED traffic signals and wanted to craft a response. Check out the question and answer below, then learn more about a Minnesota community’s experience.

Question: I’ve heard LED traffic signal lights can present a problem in the northern climates. The concern is that the efficient LEDs, which put off very little heat, will need to have snow and ice removal maintenance, because the waste heat that previously melted the snow/ice is no longer there. Is this true?

Answer: To find an answer to this question, I started by asking Andrea Lauer, mayor of Royalton, MN about her experience.

Sarah: Your LED signals have been up for a few years now, has your city experienced any problems with this? If so, how do you address it?

Andrea: We discussed the issue of possible snow/ice build up on LED lights before making the switch. We felt that if we had a problem, it would not be often and we could handle any problems with local law enforcement directing traffic while working to clear the problem signals. We have not had a problem with snow/ice buildup since they were installed. Though it is a legitimate concern.

In summary: This provides a good perspective on the issue. While it is important to be aware of it as a potential issue, don’t expect it to be much of a problem. When weighing this legitimate concern, keep in mind that LED signals have two marked safety improvements over incandescent bulbs. Since LED bulbs last up from 30 to 50 times as long as incandescent bulbs, they drastically reduce the potential problem of a traffic hazard due to bulbs burning out. Hazard from bulb burn out is quite random, and hard to prevent, whereas hazard from snow cover is entirely predictable and preventable. Additionally, being a brighter and more crisp light, the LED signals are more visible in inclement weather.