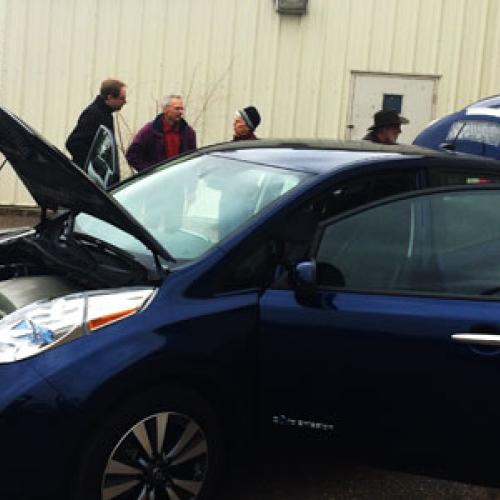 Over 40 people stopped by the Sprout Growers and Makers Fair in Little Falls on Saturday, March 25th to learn more about electric vehicles. On display was a sleek black Tesla Model S owned by Jessee Holmes, and a sporty-looking blue 2016 Nissan LEAF owned by Jeff Riegle. The owners even stayed after the event was over to answer tons of questions from attendees!

“It was a smashing success!” said Sarah Hayden Shaw, Central CERT Regional Coordinator. “100 or more people walked by the cars, which were parked right by the front door, most everyone at least craned their neck to see what the fuss was about, and 40 or so actually stopped to ask questions.”

Two other Tesla owners attended the event, and helped field the onslaught of questions from interested attendees. They planned to stop in to the Tesla Supercharger station at the Baxter Arrow Wood Lodge when the event was over.

Jeff and Jessee gave a presentation and fielded a large amount of questions from EV-curious attendees. Among the questions, people asked about the reliability of the cars, the cost of owning and then driving the cars, charging infrastructure at the home, and whether or not the cars could do ‘donuts’ in the parking lot. The biggest topic of discussion was about battery charging and range. The Tesla on display has a range of 216 miles, which covers all but the long trips, the Leaf has a range of about 80 miles, which covers most routine driving.

“One point the two raised was that the needs of electric cars for charging stations are not the same as those of gas and diesel vehicles, because no one has a gas station at their home,” Sarah said. “EV owners always leave with a full ‘tank’ or charge, and so charging is only needed at far away destinations, not at every corner like a gas station.”