Event Highlights: Crowd Gets Charged Up About Electric Cars in Rochester

The event was kicked off by Stefan Theimer, who welcomed folks to Cascade Meadow and gave a brief overview of the facility’s LEED certification, wind turbines, and plans for the surrounding property to hold seven types of wetlands. He welcomed the public to visit Cascade Meadow during its opening day Saturday, June 4th from 9am to 4pm. The open house will include building tours, renewable energy tours, interactive exhibits, wetland restoration updates, family activities, and storm water feature tours. 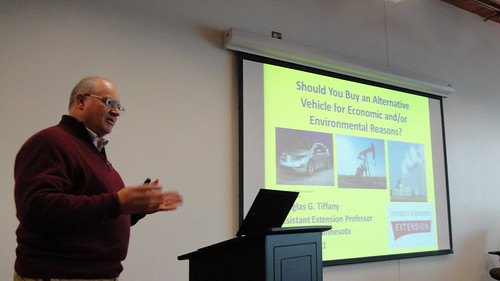 “There are three important reasons to use electric cars: national security, economic vitality, and environmental sustainability,” said Greg Palmer, who is both Director of Account Management at Xcel Energy and a member of Drive Electric Minnesota, a partnership of public and private entities that promotes electric cars. “The money we spend on gas would much better be spent in our communities, contributing to our state’s economy and adding economic vitality, rather than flying out of our pockets overseas,” added Palmer.

Showing a newspaper ad for an electric Rolls Royce, Dan Hayes, Manager of Renewable Energy and Agency Communications at Southern Minnesota Municipal Power Agency, joked that he was contemplating buying one since “they’re a mere $3 Million.” Joking aside, Hayes said every car manufacturer in the world is working on an electric plug-in vehicle, except Fiat, which is working on creating a natural gas powered vehicle. The U.S. Department of Energy has set a goal of one million electric vehicles on the road by 2015. Hayes listed the pros and cons of electric vehicles, saying that the cons that exist can be resolved by improvements in batteries, resulting in lower cost, higher power density, and better thermal management. 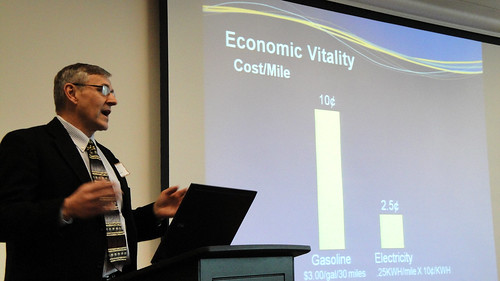 Eddie Webster, Load Management Coordinator of Great River Energy (GRE), showed how charging electric vehicles impact GRE’s load. Webster mentioned that batteries for Electric Vehicles cannot be used for charging cars after they have 80% capacity remaining. However, Webster said that utilities are looking into potentially buying batteries used at 80% to install in neighborhoods as energy storage systems which could hold renewable energy.

Steven Cook, Senior Electrical Engineer of Rochester Public Utilities (RPU), said RPU may add one or two more charging stations in the next year, in addition to Minnesota’s first charging station, located at 1st Street Parking Ramp, west of the library, in Rochester. Greg Palmer mentioned that 60 charging stations are planned for installation in the Twin Cities, including some with solar chargers.

Cook mentioned that even if utilities offer low rates for charging during non-peak times, there are still challenges, including the cost required to change the infrastructure to have multiple meters to register varying rates. Both Cook and Palmer mentioned that utilities are looking into how to structure incentives so people will use electricity when there is less demand on the electrical grid. All electric cars will have at least Level One charging (110 voltage- household standard; takes 8 – 10 hours to fully charge), and Level Two (240 voltage; 4-6 hours), but not all will have Level Three (480 volts; 10 minutes). The speed of discharge does affect battery life, so charging them at a slower rate makes batteries last longer. Level Three could create challenges for utility loads if a substantial number of electric vehicles were charging during peak demand in the summer. 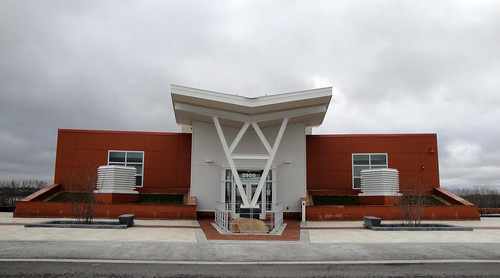 Also noted during the forum was that although the efficiency and batteries of electric cars have significantly improved in the last decades, electric car performance in Minnesota winters still needs further testing.

Following the electric car forum, Cascade Meadows offered a tour of its Energy Fun House which is an interactive exhibit highlighting energy efficiency improvements for homes, in the upper level of its LEED-certified building.

We welcome you to download the presentations from our fantastic speakers:

Photos from the event:

Media from the event:

About our host: The mission of Cascade Meadow Wetlands & Environmental Science Center is to establish itself as a regional resource for environmental education, with an initial focus on energy, water and wetlands. Cascade Meadow aims to serve as a catalyst for meaningful and enduring learning that promotes sustainable living now and for future generations by encouraging personal and organizational change, as well as fulfilling environmental careers. Join Cascade Meadow for its opening day June 4th. Learn more at www.cascademeadow.org

Looking for more? Check out these recent posts: