A family’s journey to decarbonize their home

Two years after installing a cold climate air source heat pump (ASHP) and capping their gas line, Karie and Drew Johnson of Saint Paul couldn’t be happier with their decision to decarbonize their century-old home.

We spoke to the family about their motivations for going all electric—heating, cooling, cooking, cleaning, and driving—and what steps they took to reach this ambitious goal.

When Karie and Drew Johnson bought their 1400-square foot home in Saint Paul in 2003, they knew the nearly century-old home would need some upgrades, eventually. The 1921 home had a gas furnace from the 1940s, and an older gas water heater and appliances, all nearing the end of their lifespan. With no central air conditioning, the family would operate two window units for the home during the summer. Energy efficiency improvements were needed, but how and why the family made those investments was a “winding story,” Karie admitted.

That journey started in earnest six years ago, when the oldest of the Johnson family’s three children was in fourth grade. In 2014, the family joined MN-350 and traveled by bus to New York City to participate in the People’s Climate March.

“That was our first big event where we felt connected to and involved in the community taking a stand for climate justice, here in the Twin Cities, in the United States, and across the globe. We’ve been involved ever since, and that was around the same time we started making changes in our home, as well,” Karie said.

Motivated to do their part to shift away from fossil fuels, the Johnsons took incremental steps to decarbonize their footprint. They enrolled in their utility’s green pricing program—Xcel Energy’s Windsource program. They swapped out gas-powered appliances, switching to an electric dryer, and then an induction cooktop and electric oven, as those needed replacing. Eventually, they bought an all-electric Nissan Leaf.

“It feels good to be contributing to cleaner air for others, by using our electric vehicle and sourcing our electricity from renewables,” Karie said. “Electricity on the grid in Minnesota is increasingly coming from renewable sources, which makes it a cleaner choice than traditional gas or propane for powering our homes and vehicles.  Knowing this fact, one of our goals has become divestment from fossil fuels in as many parts of our lives as possible.”

When Karie and Drew started planning an addition to their home in the summer of 2018, the timing made sense to invest in a new HVAC system and electric water heater.

Given existing ductwork in the home, they explored whether a central air source heat pump (ASHP) could work for them. ASHPs use electricity to both cool and heat a home, working like air conditioners to cool and then in reverse to move warmth from outside air into the home to heat. These units heat homes up to three times more efficiently than forced air and electric resistance heating systems.

Karie remembered first learning about ASHPs during a home tour they took, as the family was looking for design inspiration.

“One of those homes on this tour had a really cool setup with a central air source heat pump and some split units on the wall. They had also retrofitted their home, so we saw how it could be done efficiently,” Karie said.

With advancements in cold climate ASHP technology in recent years, these systems are starting to be used throughout Minnesota, but more work is needed for widespread adoption. Education about ASHPs and their benefits can improve awareness of both contractors and consumers.

The Johnsons pointed out this need for greater awareness. Many of the contractors the family spoke to in the Twin Cities were not familiar with ASHP systems. Some even lobbied against them or suggested maintaining a gas backup, which would have added costs to the project and defeated the purpose of the family’s decarbonization goal.

To realize their vision, the family kept advocating for what they wanted.

“We kept asking, ‘If it’s possible, why not?’” Karie said. “This ASHP system would be cleaner and greener going forward, but we only found one person who was willing to go along with this vision. It seems contractors may have a ways to go, so it’s super important that consumers are aware and know that this is possible.”

Fortunately, the Johnsons found an HVAC contractor with Minneapolis Saint Paul Plumbing Heating Air, Inc., who was willing to work with them to plan an ASHP system for their home. That design was a two-zone system: a central system for the home’s main floor with its new addition and a wall-mounted, ductless or mini-split unit in the home’s half-story upstairs, which runs independently.

During the construction and installation process, the family also upgraded the home’s insulation, which further reduced drafts and saved energy.

I like to think about education and an opportunity for someone else, who might not be familiar with a given appliance or technology, to try it out or learn about it. But it comes back to the primary reason we did this. It’s because we have three kids, and this is their future. The choices we’re making as adults matter.

Increased comfort without breaking the bank

All these investments helped make the Johnson’s home more “uniformly comfortable,” Karie said. The family appreciates the modularity of the new system, which has enabled more control over different parts of the house, helping with both efficiency and comfort. They also cited benefits of improved indoor air quality with filters that the family can easily replace and a reduced risk from carbon monoxide from appliances and heaters burning fossil fuels (combustion) in the house.

Although converting to a new heating system did require a large investment upfront, the Johnson’s energy upgrades have not resulted in significantly higher bills overall—a relief given some uncertainty in going all-electric. The family had understandable concerns about how their energy bills would compare before and after the retrofit.

“There was anxiety around the unanswered monthly cost. This was such an unknown. But it has ended up being cheaper for us in the summer, and the costs in the winter are comparable,” Karie said, about the household’s electric bills.

In addition to no longer paying for natural gas and receiving a welcome rebate provided by Xcel Energy to its WindSource customers this fall, the Johnson family has benefited from a reduced winter electricity rate through the utility, available to homes in its service area heated with electricity. It took some persistence, but Karie found the right customer service representative at Xcel Energy to help them enroll in this rate reduction. Doing so has helped keep the family’s heating costs manageable during the winter months. In summer, improved efficiency of the central system, as compared to the two window units the family used previously, has helped reduce cooling costs.

Being an early adopter of new technology like ASHPs is not always straightforward, but it can be rewarding. In the end, the Johnson family was glad they could make their vision for an all-electric home powered by renewables a reality.

“It felt good to cap off the gas line, when we were all done with this project. That was a celebratory day—one we’re personally proud of. We worked for years to be able to take the steps to replace these features in our home. All told, we’re really happy,” Karie said.

While some households may stop there, Karie and Drew noted the importance of spreading the word about lessons learned and taking responsibility to protect future generations.

The Johnson family hopes to inspire others with their story about how ASHP retrofits are possible in older homes, not just used in new construction. The family has shared about their experience informally with interested friends and neighbors and formally through presentations about their experience to their church community and an electric vehicle owners group.

“I like to think about education and an opportunity for someone else, who might not be familiar with a given appliance or technology, to try it out or learn about it,” Karie said. “But it comes back to the primary reason we did this. It’s because we have three kids, and this is their future. The choices we’re making as adults matter.”

Could an air source heat pump work for your home? 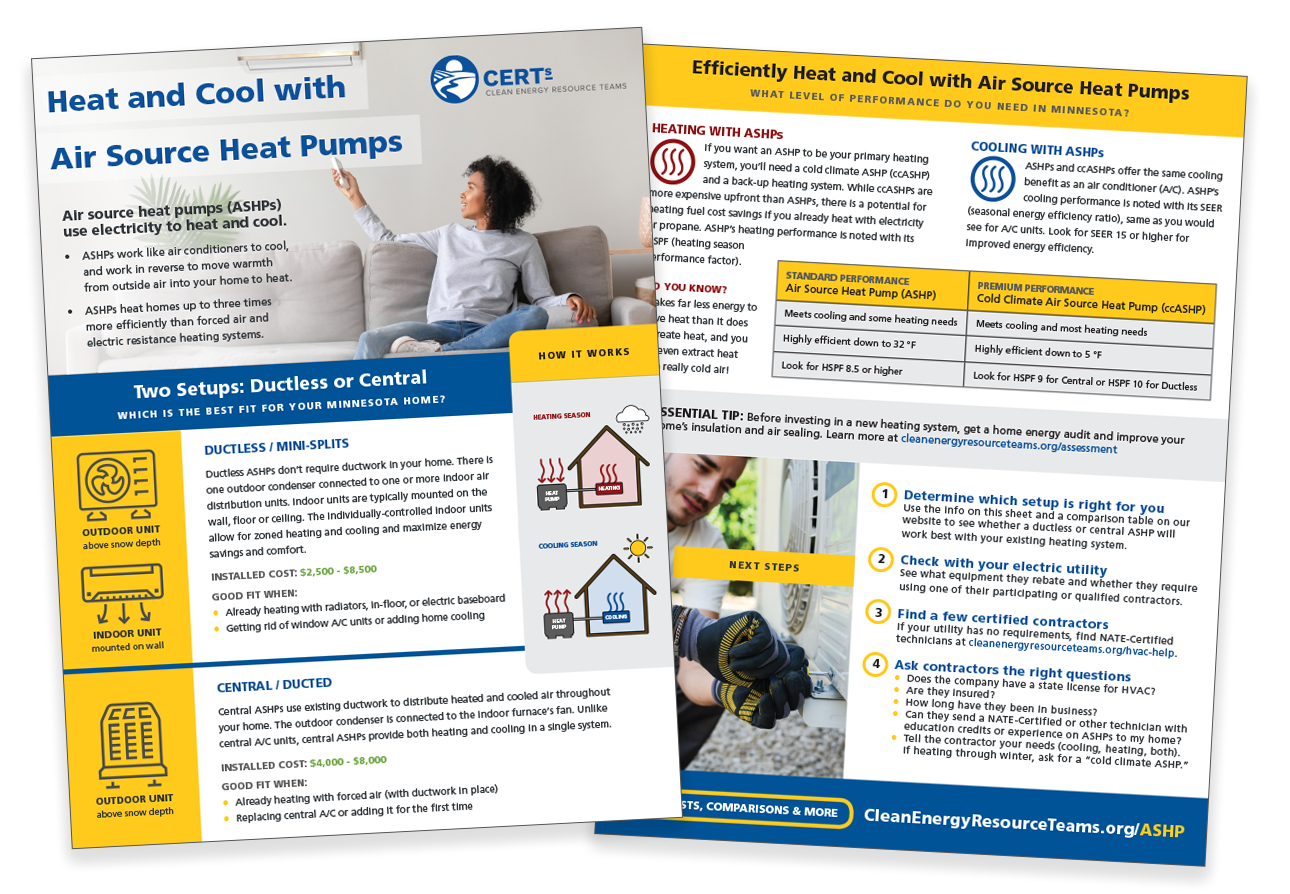 Air source heat pumps (ASHPs) use electricity to heat and cool. Use these resources to learn all about ASHPs and if they might be a good fit for your home or business.

There are a lot of new lighting options out there today, so CERTs has created a suite of resources to help you find your way!

Buy Renewable Energy from Your Utility

Most utilities offer programs to buy wind or solar energy for a small premium as an easy way to be green.

This family powers their lives with solar, geothermal & EVs!

For single mom, weatherization about much more than just energy savings