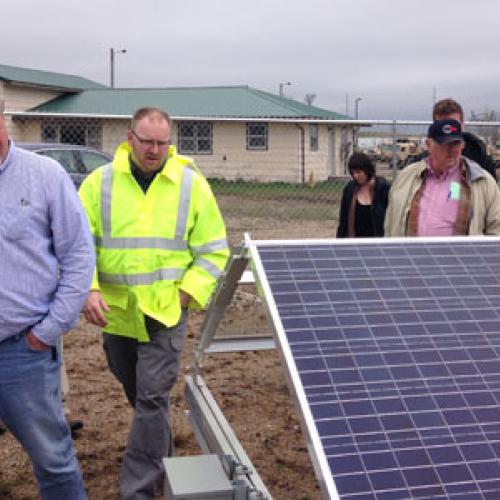 Getting pumped about clean energy at tour of Hutchinson projects

On Tuesday, April 18, 2017, over 20 people gathered at City Hall in Hutchinson, Minnesota, to take a driving and walking tour of the many clean energy and sustainability projects that the city has engaged in over the years.

“We’re doing it for multiple reasons—economic and environmental—and then we are benchmarking so we can show people where we are saving money,” noted Mayor Forcier.

The city even created its own composting program to process and sell the compost it collects as a way to recoup costs and control taxes. There is also a leaf collection program each fall that on certain days people can sweep their leaves to the curb and the city gladly picks it up to add to their profitable composting business. A win-win arrangement, residents are thrilled that they can skip putting the leaves in bags and hauling them across town.

“It’s about being opportunistic,” said Paulson. “Not just switching out an old lightbulb but looking into switching 20 or more lightbulbs, looking at economies of scale.”

The tour then went to visit the biggest City owned energy user, the Waste Water Treatment Facility. There they were met by Kent Exner, Public Works Director and Randy Czech, Wastewater Operator. Using innovative technology and management practices, the city was able to reduce their baseline power usage at the facility by 20%.

“It’s all about the data,” said Paulson (who is also a WC CERT Steering Committee member). “How is the system performing? How can it be more efficient? The data helps guide decision making processes and saves a lot of legwork.”

The city even re-purposed an old brownfield site next to the waste water treatment plant to host a solar array. Invisible to the naked eye, the panels sit on top of 15 feet of waste from an old landfill, making use of land that wouldn’t be used for any other purposes.

The tour ended at the Depot redevelopment site. The city had recently moved and then renovated their 1889 train depot, creating a permanent farmers market site, a community meeting space, a rain garden, and yet also preserving a significant part of the old depot walls to highlight the historical art and graffiti left on the walls throughout the years. The depot will also serve as a trailhead for a coming bike trail.

“None of this happened by accident,” noted City Administrator Jaunich. “One of our core values is the environment. Everything we do we do for a reason, for a purpose.”

Learn more about Hutchinson’s solar array on a brownfield site.

Check out photos from the event

Similarly, learn about efforts by the City of St. Cloud to be 80% renewably powered and save energy in their wastewater facility, as well.