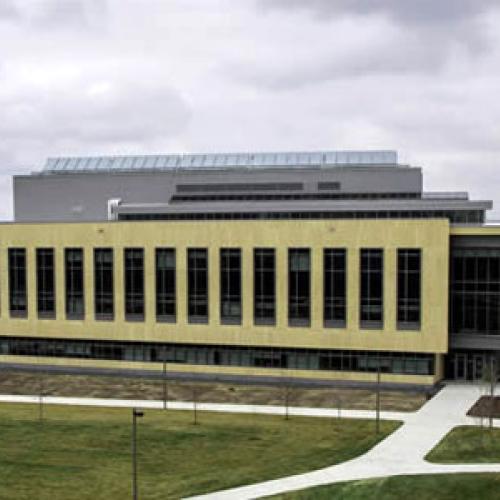 Overlooking the town of St. Peter, Minnesota, Gustavus Adolphus College is beautiful campus. Over the past few years Gustavus has been able to add a variety of renewable energy systems to add to its charms, including a real focus on solar thermal hot water systems. To learn more, we spoke with James Dontje, Director of Johnson Center for Environmental Innovation in Environmental Studies.

Joel Haskard: Tell us why Gustavus has focused so much on solar thermal as a renewable energy technology. 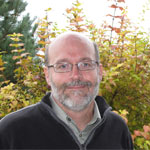 James Dontje: As a part of our overall environmental stewardship and climate action effort, we have a commitment to reducing our fossil fuel emissions in general and our greenhouse gas emissions in particular. While the fact that electricity production in MN is still carbon intensive and natural gas prices are currently low puts the focus on renewable electricity production, thermal energy from natural gas still makes up over 30% of our greenhouse gas emissions. To limit the most extreme effects of climate change, we all need to reduce carbon emissions by 80%—we are not likely to achieve that goal without replacing some of our natural gas consumption with renewable energy. The campus projects we have installed to date, while still relatively small compared to the need, they are giving us a good opportunity to learn about the technology and how to deploy it on campus. 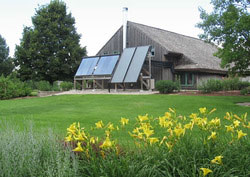 Joel: How have the systems performed so far?

James: Although I do not have data from the largest system on Beck yet, the other systems have performed very well. I evaluated the performance of the systems on the Lund athletic center (swimming pool and domestic water heating) and the Jackson Campus Center (domestic water heating) over 8 months and system efficiencies 50% and above for the most part. This illustrates the hallmark of solar thermal technology—high solar energy collection efficiency—but also the challenge: all this energy is thermal energy and needs to be used on site. Both of these systems have year round thermal loads which make good use of the energy collected.

Joel: What does the campus community think of the solar thermal projects?

James: Overall, I think they are seen as a positive step by the campus and good part of our educational efforts to prepare students for the future. They have been integrated into existing sustainability education efforts in useful ways. 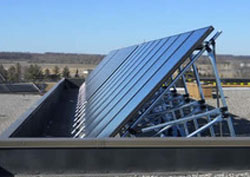 Joel: Have there been any surprises (either good or bad)?

James: No, not really.

Joel: For a campus thinking about installing solar thermal systems (either air heat or hot water), what advice would you give?

James: The best use for solar thermal energy is, as I noted above, where you have a year round thermal load. The Lund Center (with a swimming pool) and the Campus Center (with a year round dining service operation), both fit very well. Less obvious is the large system on Beck Hall. But what many people don’t realize is that in large HVAC systems, air has to be reheated, even in the summer, after being chilled to get the humidity out. Normally, this requires natural gas heating, but on Beck we can use the solar thermal system to do that reheating.