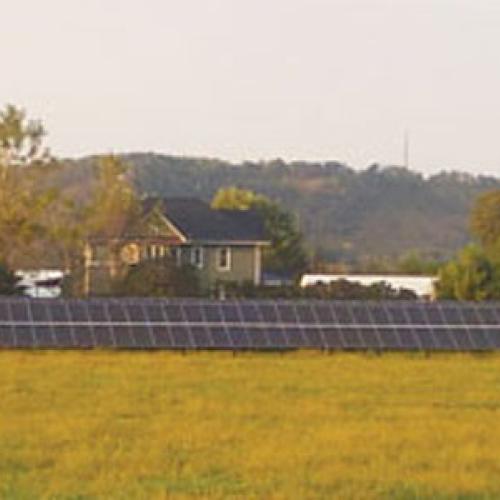 This article was republished from the original by Kirsten Zoellner with the Fillmore County Journal.

With the costs related to farming on the rise, Rushford resident and farmer Jon Peterson is always on the lookout for ways to increase efficiencies and maintain sustainability efforts. This May, Peterson and his family installed a 37.5 kilowatt-generating solar array at Hill Vue Farm, their 800-acre organic farm.

“This was really the only option we considered,” says Peterson. “I had thought about wind in the past, but decided on solar because of much less maintenance and cost.” The farm currently milks 65 cows, feeding out bull calves and replacement heifers, along with a herd of beef cattle and sheep. Specific energy drains on the farm including milk cooling, vacuum pump, ventilation fans, water heaters, and water pumping, in addition to everyday energy consumption. The new array covers the energy demand of these and then some.

Prior to beginning the project, Peterson talked with other farmers in his dairy cooperative who had completed similar projects. From this, he was able to locate the best options, eventually deciding to partner with MinnSolar to determine the project scope, provide materials, and do the installation. In March of this year, they applied for permitting.

According to Peterson, there was little groundwork that needed to be done prior to installation. A location with direct southern exposure was already selected and Paul Kreidermacher, owner/engineer of MinnSolar, did the installation in one week, completing the project June 1.

“We chose Paul from the recommendations of others and I liked the fact that he took care of all the paperwork and he did all the construction and electrical work himself with two helpers,” adds Peterson. The final result was a 120-panel array consisting of two rows. The entire spans 120 feet, reaching 10 feet in height. The array needs little maintenance, other than standard inspection and is designed to meet a variety of weather conditions.

Watching the meter for the first time and seeing power being sent off instead of coming in has been the biggest highlight for the family, which also includes Jon’s wife, Lori, son, Taylor, and his wife, Gina.

There are several system components required which make power correctly function. “The solar rays are converted from direct current to alternating current power through four inverters located on the supports of the panels. It is then fed back into the power grid and meters measure how much power you produce and how much you use. A running total is kept for the year and if more kilowatt hours are produced than used the power company pays you for those; its called net-metering,” explains Peterson.

With interconnection rules in Minnesota, systems up to 40 kilowatts are allowed to offset consumption with companies paying various rates for excess power, according to MinnSolar’s online data. “Our electricity costs average $700 a month. So far, the solar has produced that plus extra kilowatt hours that are being carried forward. That can be used in the winter when the solar production may not be as much,” adds Peterson.

MinnSolar suggests properties determine annual energy consumption and size systems based on consumption, designing slightly oversized systems to offset potential connection charges. Other assistance to projects comes by way of Residential Renewable Energy Tax Credit, equating to a deduction of 30% of installation costs from federal taxes. In addition, solar systems receive exemption through Minnesota Solar Energy Sales Tax Exemption, as well as annual property taxes. Further assistance comes through grant eligibility in Minnesota’s Fix-Up Loan Fund Program or US Department of Agriculture’s Rural Energy for America Program grants, and in some cases, rebates provided directly from utility companies. Add to this data from Minnesota Department of Commerce which shows the cost to install solar systems has dropped 50% in the last five years and it’s no wonder more are considering the solar advantage.

The array is expected to produce enough for Peterson to recoup installation costs within 10 years.