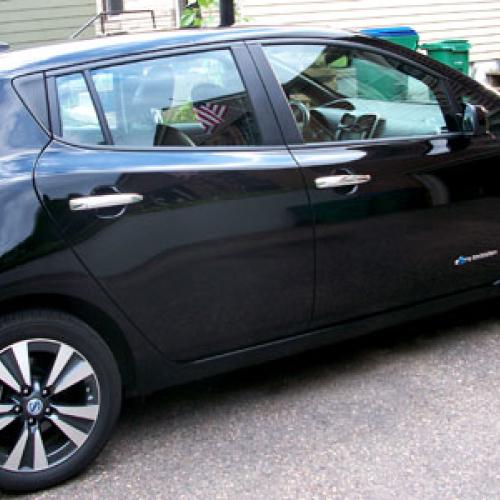 More and more electric vehicles (EVs) are entering the national marketplace and hitting Minnesota roads. CERTs is doing a series of interviews with EV drivers to learn about their experiences.

Meet Jim: Jim Beecher of St. Louis Park drives an EV (Nissan Leaf 2013) because he decided he didn’t want to buy gasoline anymore. He previously drove a Ford Fairmont which he converted as well as a converted 1964 Volkswagen Bug.

Joel Haskard: Why did you decide to get an EV?

Jim Beecher: After the 9/11 attacks and the mounting evidence of global climate change, I decided I didn’t want to buy gasoline anymore. In 2003 I was able to get a hold of a partially-converted Ford Fairmont, which I finished and drove for three years. I wanted to do another conversion, and this time I refurbished and converted a 1964 Volkswagen Bug. I drove that car through 2009, when a charger mishap took out my battery pack. This also coincided with the birth of my daughter, so I didn’t have as much time to work on cars for a bit. I always said that once commercial EVs were available I’d buy one; so when my trusty 1996 Toyota Camry died in 2013, I went for it. At the time a local dealership offered me a good deal on a hail-damaged LEAF, I couldn’t resist.

Joel: What is the make and year of your car and how much have you driven it?

Joel: What has been your experience so far?

Jim: Driving the LEAF is a joy. Cheap to operate with ready power and acceleration (love those modern inductive AC motors!), it also handles like a sports car because the batteries on the floor give it a low center of gravity. It’s quiet and needs virtually no maintenance. Regenerative braking allows it to stop on a dime. It’s the best car I’ve ever had.

Joel: What do you like most/least about the car?

Jim: The Most: The ease of use and quality of the vehicle. The Least: The winter range hit. I lost 30 miles of range last winter in the extreme cold.

Joel: Tell us a bit about your charging routine.

Jim: I have a Schneider Class 3 charger that uses 220v to charge the car form zero to full in about three hours, which ends up being 90 miles or so. Usually, I try to keep the pack between 20% and 80%, so I drive it a few days between charges, but in the deep cold of the winter I keep it hooked up all the time I’m not driving it so the battery heaters can use AC.

Joel: What would you say to anyone thinking about getting an EV?

Jim: An EV offers a lot of pluses and very few minuses. If you take advantage of the tax credit and shop around for a good deal, it doesn’t cost much more, either.

Joel: Anything else you want to add?

Jim: The genie is out of the bottle, commercial EVs are here to stay.

Hear from other EV owners