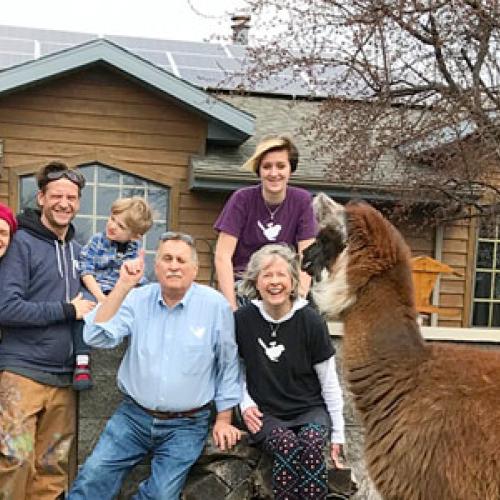 Kellogg, MN family and their llamas welcome Made in Minnesota solar panels to their home

Solar is a win-win-win for incentive recipients, economy and environment

Ron and Kathy Gray of Kellogg, Minn., applied for the Made in Minnesota Solar Incentive Program in 2015 and were selected to receive the incentive. They had a 9.9 kW rooftop solar system installed on their house, just off Highway 61 in southeastern Minnesota. The system was installed in September 2015 for $40,000.

They have been pleased with the performance of their new clean energy system, which provides about 85% of the electricity needed annually to power their home. They will receive an incentive payment of about $2,250 each year in June for 10 years, based on the electric generation of their system in the previous calendar year. With a 30% federal tax credit and the incentive payments, they can see the financial and environmental benefits.

“The panels are guaranteed for 25 years, so we will be getting at least 15 years of free power after paying off the panels,” said Ron Gray. “That is a good investment, and it’s clean energy.”

As owners of LARK Toys, their popular business located adjacent to their home, the Grays applied for and will receive 2017 Made in Minnesota funding support to install a 39.9 kW solar energy system on their business. The system will be installed this year.

“My wife and I are very committed to be as green as possible,” said Ron, whose business adopts several other green practices. “When we heard about the Made in Minnesota program through Aquilla Solar, we were very pleased to get selected for the program for our home. And now we’re looking forward to powering our business with solar.”

A boon to the environment, economy

The residential solar array is not only a good deal for the Grays, it’s good for the environment. “We’re generating clean energy and helping minimize pollution in our country,” said Ron.

What makes their system even better is that the panels were assembled in Minnesota (by Heliene) and installed by a local solar installer (Aquilla Solar of Wabasha), so it benefits the clean energy economy locally and statewide. “Solar energy and the Made in Minnesota program are really a win-win for everybody—my family, the economy, and the environment,” added Ron.

Aquilla Solar relies on Made in Minnesota

“Without Made in Minnesota, we wouldn’t have started this business,” said Dave Fisk, president of Aquilla Solar. “About 80 percent of our business comes from Made in Minnesota clients. In two years, we have grown to five full-time positions and we use 7-8 companies locally to install systems.”

Aquilla Solar moved into the old Clinicians Building in downtown Wabasha in 2014, and business has been brisk ever since. Aquilla provides solar energy systems to residences, businesses, cities, schools, churches and other nonprofit groups along the Mississippi River Valley, from Hastings to LeCrescent. Most of those are in Xcel Energy territory.

“Made in Minnesota has been a great economic energizer for small towns, providing a great financial boost to communities while sending an important environmental message to rural Minnesota,” adds Fisk.

This year (2017), Aquilla has contracted to do 83 projects—64 residential, 18 commercial, and 1 nonprofit—that have been approved for 2017 Made in Minnesota funding. That accounts for about $2 million in projects. Overall in 2017, the Made in Minnesota incentive program will fund 679 solar photovoltaic (PV) projects that will add about 10 megawatts of new solar electric power in Minnesota.

“What the Made in Minnesota program has done is alleviate the solar rollercoaster and helped make solar affordable for many homeowners, businesses, and nonprofits that otherwise would not have gone solar,” Fisk said. “Now, as the price of solar continues to fall, the hope is that the solar market in Minnesota in the future will flourish with less and less help from incentives.”

Two years ago the Grays paid $4 per watt for their system. Today, Aquilla Solar customers are paying about $3.20 per watt, or about 20% less in just two years. The price to install solar in Minnesota has decreased 64% since 2011, according to the Solar Energy Industries Association (SEIA), largely because of declining hard costs to produce panels.

Made in Minnesota has helped drive growth in the rooftop solar market statewide. For instance, solar jobs in Minnesota increased 44% from November 2015 to November 2016, according to the 2016 National Solar Jobs Census. Minnesota now employs 2,872 people in the solar industry, up from 1,995 a year ago. Over the last three years, state solar jobs have increased by 253%, from 814 in 2013 to the 2016 total. An estimated 500 Minnesota companies are involved in solar manufacturing, sales, distribution and installation.

While the economics of solar make great sense to so many Minnesotans, including the Grays, it’s the environmental impact of clean energy solar that motivates most solar adopters.

“Unlike some people, I think global warming is a real challenge,” said Gray. “The less CO2 we put into the Earth’s atmosphere, the better off we all are. So that benefits everyone, especially future generations.”

Made in Minnesota has funded 1,800 projects and 25 MW in four years

The Made in Minnesota Solar Incentive Program is a 10-year, $15 million-a-year program that is administered by the Minnesota Department of Commerce. The program began in 2014 and will continue through 2023, with the goal of building the solar industry in Minnesota and incentivizing Minnesota residents and businesses to install solar PV and solar thermal systems. The program supports the 2013 Solar Energy Standard set by the Minnesota Legislature that requires investor-owned electric public utilities (Xcel Energy, Minnesota Power, and Otter Tail Power) to provide 1.5% of their power from solar by 2020. Minnesota will likely reach that goal by the end of 2017.

Applications for solar PV and solar thermal projects are accepted annually from Jan. 1 to Feb. 28 and recipients are selected by a random selection process conducted by a third-party vendor. In its first four years (2014-17), Made in Minnesota has helped fund about 1,800 new solar projects and more than 25 MW of capacity. The number of projects funded in 2017 increased 73% over 2016, and the solar capacity of those projects increased 80% over 2016.