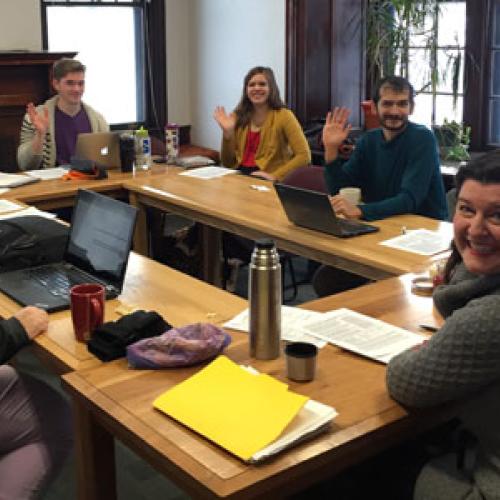 The energy revolution is spreading, and Minnesota Interfaith Power and Light (MNIPL) is doggedly determined to help Minnesota’s variety of faith communities join the movement. Although some energy efficiency and clean energy resources are available to congregations and other faith organizations, MNIPL staff wanted to jumpstart connections and empower congregations to live out their values. In an effort to further faith communities’ energy efficiency efforts, in 2016 the MNIPL Energy Efficiency Team undertook a Metro CERT-funded outreach project.

Julia Nerbonne, MNIPL’s Executive Director, explained how this project lines up with values articulated by both MNIPL and many local faith organizations: “Our role in the community, in the broader energy movement, is to work with faith-based houses of worship to actualize their values in terms of carbon reduction and social justice. Our energy efficiency work is embedded in the context of our broader social justice work and a call to action in building a just and sustainable world,” Nerbonne said.

As Nerbonne and MNIPL see it, accessing energy efficiency resources should be truly accessible to all people and groups—an ideal which was the basis for their recent energy efficiency outreach efforts to metro-area faith groups. “We believe that if we reduce carbon, it’s going to impact anyone, and those who are most impacted are often least responsible. Everyone should have the opportunity to save money and be a part of the energy revolution,” Nerbonne enthused.

From this equity and parity-based jumping off point, MNIPL staff and partners sat down and pondered the existing barriers that congregations and other faith groups face when trying make practical changes.

“We started out by bringing a team of experts together—we had people from the Green Building Council, EnerChange, CERTs, and other experts and citizen leaders. We brainstormed the ‘barriers and bridges’ to getting energy efficiency work done, and came up with a five-part process,” Nerbonne detailed. This process helped MNIPL construct well-organized outreach plan that was flexible and adaptable to the many differences that exist between local faith communities.

The five steps to getting projects done:

After formulating their plan of attack, MNIPL’s team quickly got down to business. Throughout the project MNIPL engaged a total of ten congregations, conducting in-depth interviews with six of the ten. The faith communities were diverse in nature—five of the ten were Islamic communities, while the other five were Christian. A wide variety of mainline Protestant denominations were represented as well. As a part of the five-step process, each congregation was offered a free building energy assessment through EnerChange, which was a key partner in the project. They provide free energy facility assessments to all nonprofit organizations. While not every one of the ten congregations participated in the EnerChange assessment process or were able to implement large-scale changes, all ten did make at least a couple tangible modifications. Some of the smaller changes carried out included creating a compost or recycling program for the congregation.

During their conversations and interviews, MNIPL also found considerable success in tying energy efficiency projects to the idea of a just energy future and hiring contractors from underrepresented economic groups.

Although MNIPL was successful in connecting with each of the ten faith communities included in the scope of its 2016 project, there were distinct barriers that created differing levels of implementation and success. In this project, and in general in the Twin Cities, Nerbonne said that the accessibility of energy audits and similar tools is not an issue. The main barriers to greater implementation of energy efficiency projects that emerged from the whole project were a combination of financial constraints and decision-maker buy in.

“The tragic problem was, oftentimes the faith communities were a very enthused group; they would get the assessment, meet, and try to move towards action. But they frequently didn’t have the key decisionmakers they needed, and that was hard to watch,” Nerbonne said.

The financial constraints the congregations faced included an aversion to financial commitment (any form of debt), and a disconnect between the investment required and the perceived risk that the projects carried—despite MNIPL’s assurance that they would only be beneficial and save money in the long run.

Contrasting the decision-making structure of their participants’ groups with the private sector, Nerbonne said, “If a business does energy efficiency improvements, one person signs the papers and it’s done. But in the case of many of these faith groups, when everything is decided by committee in many of these conversations, one negative person can derail the whole process.”

MNIPL’s solution to the lack of follow-through and implementation by some congregations was to create a contract for decisionmakers to sign before receiving the free energy assessment. The contract idea, which Nerbonne saw as a successful intervention, was meant to increase participant buy-in and force participants to think about how they could talk with decisionmakers and secure funding after the assessment.

The lack of institutional action in some cases also led MNIPL to develop a focus on the individual, including individual behavior change and sustainable living. The project team also created a Beyond Paris Pledge following the Paris Climate Talks of 2016. 275 individuals signed the pledge to cut their personal carbon footprint 50% by the year 2030.

Another unique, congregation-specific challenge unearthed during the assessment process was the electricity rates that houses of worship are charged—or more specifically, the rates that they aren’t charged. Many faith groups’ buildings are only used heavily a couple days a week, yet they are charged the same rate every day as they do on Sunday, for example, with Sunday being a day of relatively lower electricity use across the board. Nerbonne hopes that legislation is eventually passed to provide faith buildings with more favorable electricity rates. 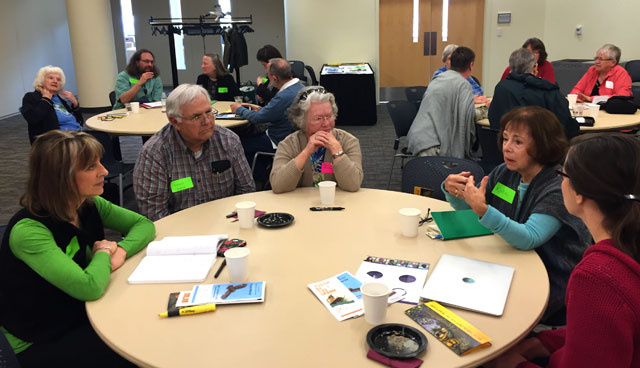 Project implementation and looking to the future

Though some congregations weren’t able to achieve substantial energy efficiency improvements this time around, several did complete or are in the process of completing impressive projects.

For their part, in 2017 MNIPL looks to focus more on encouraging congregations to participate in solar programs while continuing to push energy efficiency, despite funding challenges. At the end of the day, Nerbonne still sees finances as a general barrier to action in faith communities, emphasizing the need for programs and grants.

“The bottom line is that almost all congregations are operating on razor-thin margins, nobody has money, so there have to be programs there for them to take advantage—otherwise they simply cannot get the money.”