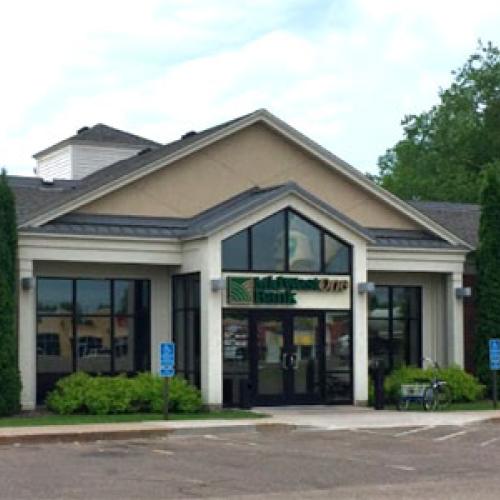 Walking into MidWestOne Bank’s cheery, modern lobby in Chisago City, you likely wouldn’t notice that the building was originally constructed in the mid-1970s. You’d also be hard-pressed, though, to notice that all the lights brightening the building—from the teller’s counter to warm tones highlighting the cozy fireplace—are LEDs, but that’s just the way Jason Gamble, MidWestOne’s Branch President, likes it. His bank recently wrapped up a complete replacement of its lighting, swapping old fluorescent bulbs for efficient LEDs, and the results of this transition speak for themselves. 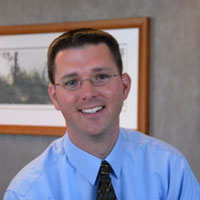 “It’s safe to say that to the general public, they really didn’t know what hit them, before and after. They didn’t notice the difference, and that was the hoped for outcome. We didn’t do it because we wanted people to say, ‘Oh, look at this awesome lighting.’ If they didn’t notice the difference, then that’s a success because we’re spending less dollars [than we did before],” Gamble said with a smile on his face.

Gamble’s bank has been under the MidWestOne flag for around a year, and it was this recent re-calibration that gave Gamble the opportunity to pitch the LED lighting retrofit project.

“I approached the new execs and said, ‘Here’s something I think we should do for the facility.’ They had already done most of our branches in Iowa in the last two years, and they said ‘We’re glad you found this,’—the contractor we used to do our project approached them about doing our 20 locations in Minnesota, and we are presently bidding them all out,” Gamble explained.

Despite this recent proliferation of energy efficiency improvements at MidWestOne banks, Gamble recounted that projects like this have not traditionally been common.

“It’s my 20th year in banking, and it’s the first time I’ve ever run into an energy efficiency project. In the past I’ve also never seen anybody that managed me do it, either. It just didn’t come up, and was not on our radar. We weren’t thinking about it ever,” admitted Gamble.

How Gamble and MidWestOne were alerted to the myriad array of opportunities that exist with energy audits and retrofits is a classic story of small-town communication.

“A commercial client of mine did an energy retrofit at his store, and we talk about his business frequently. He said to me, ‘Jason, we have more lights than the average business, we looked at our utility bill after hearing a lot about these projects and how you can cut costs. He did the research, found a contractor—the same one we ultimately used—and a few months later, said they were awesome and they saved money,” Gamble said.

Following his client’s success, Gamble thought it was time to see if money could be saved in his own building. “The lightbulb came on, so to speak, and I said, ‘We’re not the same size of facility, but it certainly can’t hurt.”

After making the decision to pursue an energy audit, Gamble and his MidWestOne team settled on the same contractor that his commercial client used and quickly got down to business.

“They [the contractor] did an audit on the building, fixture by fixture, and produced a spreadsheet that outlined the energy usage of our current lighting, showed the cost of the new ones, and the energy it would save in the future. They took our Xcel Energy utility bill and turned that into aggregate dollars and sense,” Gamble said.

The full cost of replacing all the lights in the bank building was $16,849 dollars, but upfront Xcel rebate of $5,707 dollars knocked down the cost to $11,142 dollars, while another discount took off $1,150 more, for a total out of pocket cost of $9,992. Although this price may seem somewhat steep, the projected savings calculated by the contractor were more than persuasive.

“When you took a look at my before and after projected utility bill, my ROI (return on investment) was going to be less than two years which is a very fast return. Now that we are about six months after the install, I’ve been looking at the actual bills, and it’s not quite as good as projected, but what we’ve realized is that it makes my ROI just over two years, so still very attractive,” said Gamble.

Audit and installation: Quick and easy

It wasn’t the ROI alone that made the LED upgrades practical and enticing—the actual energy audit and installation of the new lighting were low-profile, swift, and did not interrupt the bank’s normal flow of business.

“The owner came in with a team of about four employees. They asked for a little bit of my time to poke around in the nooks and crannies to locate issues, and that took maybe 30 minutes of my time. They stayed longer, wrote everything down, and were out of here in a couple of hours,” Gamble said.

Soon after, Gamble received an email with the full spreadsheet document described earlier, which also included the total energy used before and projected after the LED installation, CO2 and mercury emissions, and the total annual savings of $5,867. The audit revealed that the bank’s exterior lights were actually the biggest energy hogs, specifically their drive-in exterior canopy that has a dozen ‘can’ lights recessed in it. These heavy-duty exterior lights were sucking much more energy in total than any of the other lights inside or outside the bank.

The actual installation, which happened not long after the audit, was also a cinch.

“I got it approved at the bank, they came on out, and on install day had a couple of trucks and a crew of eight or ten guys here. They just started during business hours on a Saturday and then had an afternoon with no lobby traffic. It was very unobtrusive even where we were open, because they were working in outside areas or the back room. Then we closed for the day at 12 and they did everything indoors,” Gamble said.

A further helpful aspect of the installation was that the contracting team packaged up the old fluorescent light bulbs and took them away, while also leaving a few LEDs for the bank to start off with. So far, though, Gamble has not had to replace even one LED bulb in the six months since installation, a major departure from the bank’s old T-8 bulbs.

“I can tell you that as branch president, I’m more than pleased to not be on a ladder changing out the old T-8s every month! Since the install, I haven’t changed a light bulb yet, and they say that the new LEDs will last two or three years—it’s less pain in the butt,” said Gamble enthusiastically.

One point Gamble was made sure to get across about the LED installation is that, contrary to potential assumption, they do not require special hardware or mounting changes of any kind.

“It is also important to note that we didn’t need to replace any actual fixtures, just the bulbs themselves and in a few cases the ballast. The actual fixtures were all the same; it’s really just a LED light bulb retrofit,” Gamble said.

The funding for this project came from the bank itself, said Gamble, which does put it in a different position than other types of businesses, as they did not use a funding or grant program to help defray their costs. “We capitalized the expense and amortized it over a period of years. I know a business owner is going to care about that, and it has tax implications, if it’s a big projects. If you’re a store, how that looks and how they reconcile that [expense] with their own financial situation is a different thing,” Gamble said.

As mentioned earlier in this article, Gamble and his staff’s chief concern with the all-LED lighting was if the building’s interior atmosphere and feel would change. The outcomes of the LED lighting switch were totally positive, although under the radar.

“My biggest worry was the aesthetics—I thought it was gonna look like White Castle!,” quipped Gamble. “As you can see, there are actually some warmer hues out there, and the fireplace still has a warm look with the lights aiming at it. It doesn’t have a harsh or cold feeling at all,” Gamble said.

Before the installation, the contractor explained to Gamble that there was nothing to worry about in terms of interior lighting feel, noting that LEDs are not all harsh or cold.

“This contractor does a lot of restaurants, and they said they could ‘warm it up,’ and have many colors. They said it wouldn’t look hard, and it doesn’t. Even some staff didn’t notice the lighting change, and we actually have better lighting now because we had some neglected areas,” detailed Gamble.

When asked if the bank would contemplate doing further energy-saving projects in the future, Gamble said: “We certainly would consider it, as good as this project has been for us.” The main areas Gamble could see the bank potentially looking at are HVAC and potential energy production, such as on-site solar or subscribing to a solar garden. Gamble believes that the HVAC systems would be the most likely future project, as he sees major possible savings and improvements there.

“I’m pretty sure that, with this mid-70s building, we’re terribly inefficient. I think that’s probably the opportunity. I didn’t ever know anything about our lights until the LED lighting retrofit, and I still don’t have a clue about what I can do with HVAC to save this bank money. I don’t know what my opportunities are yet,” Gamble stated.

It’s also key to note that Gamble—and his client—completed their projects right before Chisago’s Clean Energy Hub came into being and did not receive assistance from that group, although Gamble sees it as an excellent community resource.

In the grand scheme of things, MidWestOne Bank’s first-ever energy efficiency project has turned out wonderfully, and Gamble, the branch president, is happy.