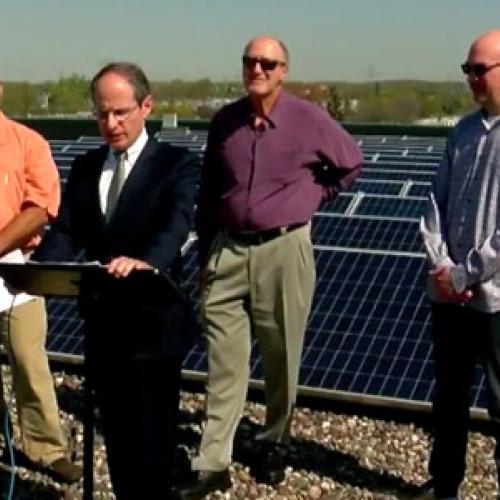 On a bright, sunny Minnesota spring day, with solar panels in the background, Minnesota Commerce Commissioner Mike Rothman announced that the state is enjoying dramatic growth in solar power, adding nearly as much new solar capacity in just the first three months of 2017 as in all of 2016.

Rothman announced the latest solar statistics at the Schneiderman’s Furniture store in Plymouth, a Twin Cities suburb. The local family-owned furniture retailer has installed rooftop solar power systems at its Plymouth, Woodbury and Duluth stores, with support from state solar incentives. The solar projects were developed by Ideal Energies, a Minnesota-based commercial solar energy developer with over 140 commercial systems in operation.

“Solar is already a bright spot in Minnesota’s energy picture, and it’s getting even bigger and brighter,” said Rothman, whose agency includes the state energy office. “Minnesota is enjoying dramatic solar growth from residential, commercial, community solar and utility-scale projects. This solar growth is being driven by both innovative public policies and market forces, as solar becomes more and more cost competitive. What used to be called alternative energy isn’t alternative anymore. It’s mainstream.”

Rothman added: “Solar provides positive results for both our environment and our economy. Solar jobs in Minnesota increased 44 percent in 2016, with nearly 4,000 Minnesotans now employed in the industry. Solar presents our state with a tremendous opportunity for a clean, sustainable and job-creating energy future.”

According to data compiled by the Commerce Department, Minnesota added 203 megawatts of new solar electric capacity in the first quarter of 2017, compared to 207 megawatts during all of 2016.

Minnesota’s total solar capacity has grown from just one megawatt in 2009 to 447 megawatts as of March 31, with more than 800 megawatts projected by the end of the year. One megawatt powers about 140 homes.

In 2013, Minnesota passed the Solar Energy Standard that requires investor-owned utilities to obtain 1.5 percent of their electric power from solar by the end of 2020, with a goal of 10 percent by 2030. Minnesota’s solar market also benefits from other state clean energy policies and incentives, as well as the federal renewable energy tax credit.

Minnesota’s solar growth has been coming from a combination of residential and commercial rooftop, community solar and utility-scale projects.

The bulk of new solar in 2016 came from large utility-scale projects, including the 100 megawatt North Star solar project in Chisago County. A 10 megawatt solar array was completed by Minnesota Power at Camp Ripley near Little Falls in November.

Solar capacity in Minnesota is expected to increase by about 600 megawatts in 2017, according to utility filings. A 62 megawatt solar farm in Lyon County was completed in January and nearly 100 megawatts from multiple sites in the Aurora Distributed Solar Project should be completed by the end of June. But much of the new generation in 2017 will come from many smaller (1-5 megawatt) community solar projects currently under construction.

If projections are met, Xcel Energy will likely exceed the state’s 1.5 percent Solar Energy Standard by the end of 2017 – three years ahead of deadline.

Although solar currently provides less than one percent of the state’s total electricity, costs are dropping fast and the market is expanding rapidly, making it a growing contributor to Minnesota’s renewable energy portfolio.

“Solar power in Minnesota today is where wind power was 10 to 20 years ago,” said Rothman. “Wind now provides nearly 18 percent of Minnesota’s total electricity generation. Solar has the potential to grow even faster and larger in the years ahead. The classic Beatles/George Harrison song says it best: Here comes the sun.”

Watch coverage on WCCO 4 News below or read articles in the Star Tribune. 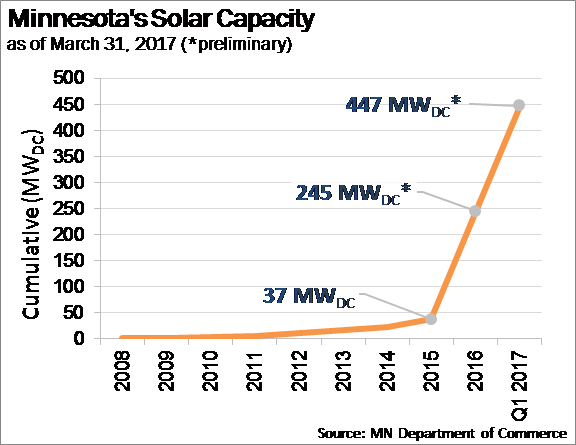 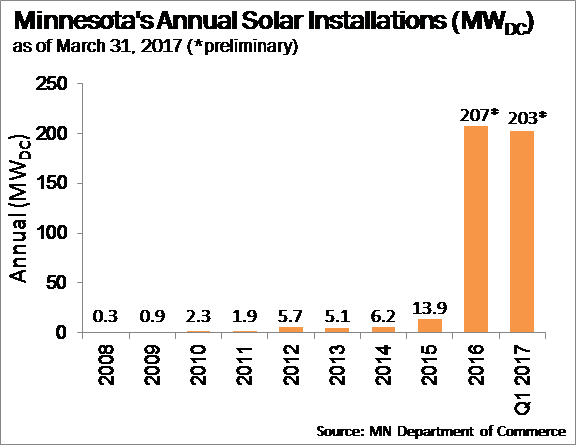 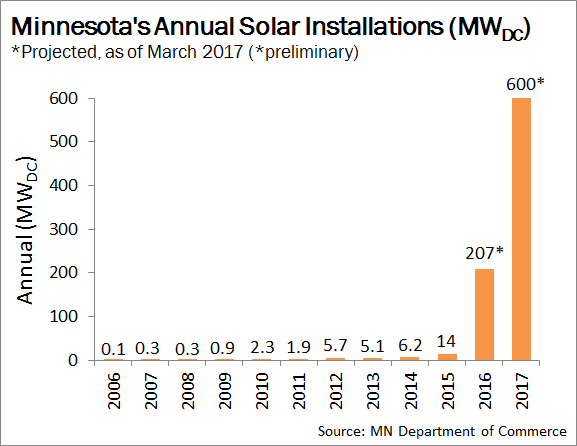