When building a new home all sorts of little details need to be decided: What color the walls will be, what the cabinets will look like, etc. Often the mechanical part of the home is given less attention. Options that cost more are easy to push off for something familiar and cheaper. Ground-source heating and cooling (often called geothermal in Minnesota) often gets set aside with its initial higher cost tag. 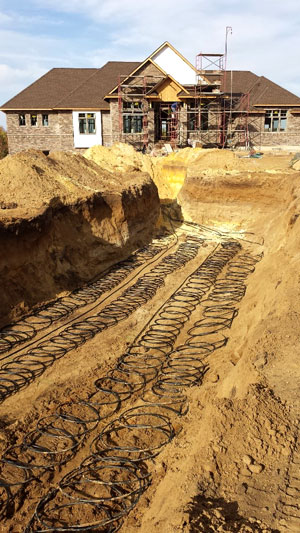 This might be a big mistake. If geothermal is examined a little more closely one realizes that it is extremely efficient and that there is a 30% Federal Tax Credit through the end of 2016, and often utility rebates that can be combined to significantly lower the initial costs. Jim Poppen—a home owner in Hampton, MN—was able to do just that. The original costs to install the geothermal system sized for a 4,600 square foot home was around $37,000, while a traditional gas furnace would cost less than half of that. But the tax credit alone for the geothermal system was about $10,000 and on top of that Dakota Electric provided a sizable rebate of its own bringing the installation cost down even further.

“Our application of the geothermal system was for new construction and we had room to do a horizontal loop field,” Poppen says. “The installation in the home is typical of a traditional system and the work for the loop field can be done without interfering with other contractors throughout the building process. It took me approximately one week to dig the loop fields but it could be done more quickly.” The Minnesota Geothermal Heat Pump Association has a nice webpage page dedicated to the different ways of installing the loops.

The system installed was a Bosch 6 ton split system that was run through the water heater. The expected cost for a year of heating and cooling the 4,600 square foot home as well as producing hot water was $944. This is about $3,100 less than it would cost a year to heat and cool the house with a gas furnace. Using the average BTU per year, the geothermal system is around 360% more efficient than a conventional system. At this rate payback will happen in under 4.5 years for this house.

“There is really nothing I would do differently at this point,” Poppen notes. “The system has been up and running now for a year and the electric bills for heating and cooling have been lower than the electric bill alone at our previous home.”

Motivations for installing the system included: