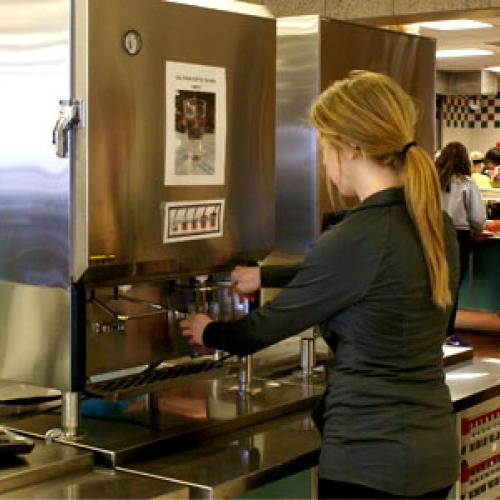 Katelyn Larsen, Minnesota GreenCorps member for the Recycling Association of Minnesota, recently completed a pilot study on bulk milk dispensers at a K-12 public school in Minnesota. The study was designed to test the feasibility of using bulk milk dispensers in K-12 public schools as well as provide a sustainable alternative to milk cartons in areas where carton recycling is not possible. Larsen tailored the project to understand both the environmental and economic costs and benefits associated with switching to dispensers. The project was supported heavily by the Jeffers Foundation, SilverKing, and the Minnesota Pollution Control Agency.

New London-Spicer High School was chosen as the pilot school based on the staff’s willingness to serve as a pilot and collect data. The school received four milk dispensers from SilverKing to replace two milk coolers for use of the pilot. Staff tracked data on milk, energy and water consumption and cost, labor, and waste and recycling generation both before and after dispensers were installed. Data was tracked for four weeks while the school had milk cartons in milk coolers to establish a baseline, and again for four weeks once the dispensers were installed.

Overall, milk consumption increased by 62 servings per day while liquid milk waste decreased by 0.9 gallons per day. Carton waste decreased dramatically. Prior to switching to dispensers, New London-Spicer recycled about 83 pounds per day of cartons, which dropped to 0 pounds per day after switching. Although the school was already being sustainable by recycling cartons, Minnesota waste hierarchy states that reuse options are preferable to recycling. Food service staff labor increased as a result of running more loads through the dishwasher and sanitizing four dispensers daily. Custodial staff labor increased by a few minutes a day. However, conversations held with the staff indicated that even though labor increased, they preferred to work with the milk dispensers as opposed to milk coolers and cartons.

In addition to the benefits seen through increased milk consumption and decreased liquid milk waste, New London-Spicer High School was able to cut their energy usage in half by switching to dispensers. Using two milk coolers over one year, the school used 4,132 kWh on average. Using milk dispensers, on the other hand, can reduce their use energy to 2,080 kWh over one year.

For comprehensive results, view the New London-Spicer Pilot Study Review and Report via the Recycling Association of Minnesota’s website >>