It all began with a pellet stove. Or more accurately it all began with a pellet stove and some conservation measures. In 2011 Prairie Woods Environmental Learning Center (PWELC) reached their goal of having a campus that is powered by 100% renewable energy. Along the way they have been seeking ways to conserve energy while keeping an eye out for opportunities to incorporate renewable energy into their campus and curriculum. So I guess we could really say that it all began by paying attention.

Back in 2003 when Dave Pederson moved into the role of Executive Director at Prairie Woods Environmental Learning Center (PWELC) he saw some opportunities to change the way the campus used electricity and heated their buildings. At that time, the propane truck was coming out to fill the tank once a week during the winter and nobody had yet gotten a handle on how the relatively new facility was performing. “We found we weren’t running very efficiently,” said Pederson. The building’s computerized air handling system had been set up to operate in fully-occupied mode. “The lesson learned was to pay more attention versus paying more in utility bills.”

In addition to getting the air handling system operating at a level more appropriate for the building’s actual occupancy, Pederson began to look for other ways to conserve. One of the first measures was to remove the three pop machines located in the trailhead. “This worked out for us and the beverage company,” Pederson said. The machines were generating very little revenue for the beverage company and creating an unnecessary electrical load for PWELC. It was just this sort of consciousness to energy consumption that began to shape the entire PWELC campus.

With some conservation measures in place, Prairie Woods was looking for other ways to offset some of their heating costs. With propane prices high and corn prices relatively low they decided in 2004 to put a pellet stove in the Education Building. They found, to their delight, that along with the conservation measures the stove saved them $3,000 and paid for itself in the first year. That stove has proven to be a workhorse and has been flexible enough to accommodate an array of fuels including corn, pelletized agricultural residue, and wood pellets.

It was also around this time that Pederson began attending his first West Central Clean Energy Resource Team (WC CERT) meetings and got to know many local utility representatives and renewable energy industry professionals. “CERTs has been instrumental to helping us reach our goals. Not just the funding, but the networking,” Pederson allowed. The idea of creating a campus completely powered by renewable energy was beginning to percolate. While researching and considering options for renewable energy installations, more conservation measures were implemented. These included: creating movable, insulated covers for three large skylights in an exhibit area; putting all of the appliances and computers on power strips; and working with the staff to be more conscious of energy use.

A 2005 conversation with the University of Minnesota’s West Central Regional Sustainable Development Partnership (WCRSDP) put PWELC in contact with U of M Electrical Engineering professor Paul Imbertson. With the help of the WCRSDP, Imbertson, and graduate student Stella Mandango, PWELC was able to get its first taste of solar with a panel mounted to a moveable trailer. The panel would be used for power at remote locations and for doing educational outreach.

Changes were also happening down at the farmhouse where the Environmental Education Coordinator lived. An air source heat pump had been installed there in 2004 and another pellet stove was placed in the farmhouse living room in 2006. 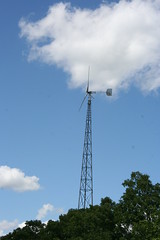 After several conversations, much research, and monitoring of their energy use, PWELC was ready in 2006 to make public their goal of becoming a net-zero energy campus by 2010, an ambitious goal, but one that seemed within reach. They got off to a good start with help from Kandiyohi Power Cooperative (KPC) and Kandiyohi County when they undertook their first major renewable energy project, the installation of a 20kW Jacobs wind turbine. “We’ve been really fortunate to have Kandiyohi County be supportive, as well as KPC,” said Pederson. The turbine came online in December of 2006 and PWELC began generating electricity that directly powered the main campus buildings. The turbine was also connected to the electrical grid and any excess electricity was used by KPC to meet the needs of their customers.

In addition to the many energy conservation measures being undertaken, PWELC was continually looking for other ways to become more sustainable. They installed composting toilets at the challenge course, the shooting range, and in the barn. They planted native prairie grasses in front of the Education Building to reduce the need for mowing, and they placed recycling containers at the farm site and the shop. Taking a holistic approach to conservation and sustainability, PWELC was becoming a model for residences and businesses across the region.

And if all this wasn’t enough, in the midst of working towards their net-zero energy goals, PWELC was also undertaking an expansion of their facilities. The 2007 project would increase the square footage of the Education Building by 25%. While making the goal a little more challenging, the addition also brought some energy benefits. Larger overhangs would help to keep the building cooler in the summer, and the breezy tree-house addition with its many windows improved ventilation throughout the building. Two more pellet stoves were also incorporated into the addition to help with space heating.

2007 was also the year PWELC made their first foray into solar thermal with a Solar Skies panel mounted on the roof of the education building. KPC again contributed to the project, this time in the form of a donated storage tank. All the while, PWELC was continuing to focus on conservation, adding insulated window shades and placing reminders next to light switches. And through a partnership with the Southwest Initiative Foundation (SWIF) they began to take the message to area schools with Youth Energy Summit (YES!), a program aiming to empower youth to partner with their communities on energy action projects and in addressing energy issues in rural Minnesota. 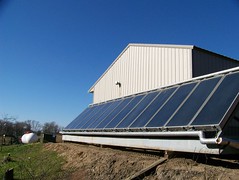 With the help of a WC CERT seed grant and continued support from KPC, Prairie Woods was able to install its first grid connected photovoltaic solar panels in 2008. “The combination of wind and solar is a really good one for us,” said Pederson, because most days you will get energy from one or the other. The 4kW solar array was accompanied by another solar thermal project, this time used to provide supplemental heat to the maintenance shop. The solar thermal panels were originally used to heat a pool at the Willmar Regional Treatment Center and the 12-panel array was now being repurposed for use at PWELC. June of 2008 also marked the first single month in which Prairie Woods exported more electricity to the grid than they imported from it, a huge milestone on the way to an even bigger goal.

While they were making headway on the electricity side of the energy equation, there was still work to be done in addressing how the building was heated. An early attempt at using an outdoor biomass boiler had proven unsuccessful and the low-hanging conservation measures had all been implemented. And while the pellet stoves could augment the heating needs, they would not get PWELC to net-zero energy by themselves. The first step was address which spaces needed to be heated, and when. During the winter months, much of Prairie Woods programming takes place outside on the ski and snowshoe trails. The needs of these groups coming in from an active chilly day differed from those of the office staff, so the two office spaces were outfitted with a high-efficiency ductless heat pump. This made it possible to heat these spaces independently, and to limit the amount of time a central heating system would be used during the late fall and early spring. 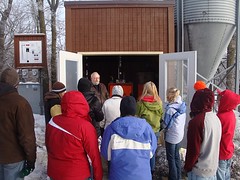 By 2009, with a large share of their electrical needs taken care of and many conservation measures in place, they were ready to take on the lion’s share of the heating. Through discussions with Bob Ryan of European Energy Connections, they learned of an opportunity to purchase a biomass boiler from Swedish company ABioNova. “We kind of operate on the theory that any BTU is a good BTU,” said Pederson adding that unlike the computer that used to run the building in full occupancy this kind of effort “does require someone to be paying attention.” The biomass boiler was purchased and placed in a newly constructed building across the driveway from the Education Building. Plumbing was run under the driveway and hooked up to heat exchangers near the two propane furnaces in the maintenance room.

To further reduce the load carried by the biomass boiler, a solar thermal air heat project was undertaken. Working with local contractor John Duevel, several custom solar thermal panels were designed and installed on the outside of the climbing wall. These panels regularly provide supplemental heat to this space and it is common to see 90-degree air being blown into this space even on the coldest winter days (pictured at the top of this post).

With the goal of being a net-zero energy campus by 2010 fast approaching, PWELC applied for and received a Minnesota DNR Solar Legacy grant. The grant allowed them to purchase more insulated shades, install three solar tubes to provide day-lighting to poorly lit areas, and to install more solar photovoltaic panels. The solar PV consisted of an additional 5kW mounted on the roof and a 3 kW pole-mounted tracking system. With all of this in place by the end of 2010, PWELC now had the capacity to be a net-zero energy campus.

In 2011 Prairie Woods did all of the heating in the main campus building with renewable fuels, largely wood pellets and sunlight. And for the first time they also produced more electricity than they consumed, generating an excess 1,340 kWh with the 20 kW wind turbine and a combined 12 kW of solar PV. Not only have they achieved their goals, they have demonstrated leadership and have become a regional demonstration site for others looking to implement renewable energy projects. To date they have generated over 40,000 kWh with wind and solar. “By paying attention and taking action, we’ve basically paid for electricity for the next 30-40 years,” said Pederson.

When asked what was next, Pederson replied, “Burn less of anything and use more solar. I’d like to see us do more with solar heating.” Other goals include installing a heat accumulator tank to store heat from the biomass boiler and getting an additional eight solar thermal panels up and running for the shop.

The conservation measures and renewable energy installations at PWELC are an investment in the long-term viability of the organization. “We’ve basically paid for electricity for the next 30-40 years.” said Pederson adding that for those just getting started, “The quickest payback is behavior and just paying attention.”

Other blog posts in this series: