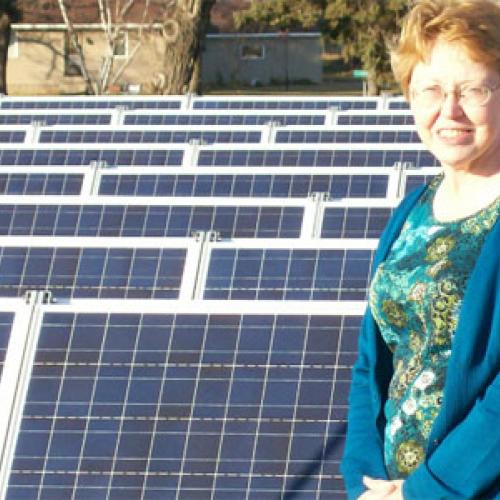 Several years ago the City of Royalton embarked on a mission to increase energy efficiency through clean energy initiatives that save money. Royalton is now cheering its solar energy project as a success on many levels.

“We were excited to see the benefit to the environment and to the bottom line for our city,” said Royalton Mayor Andrea Lauer. “Thanks to federal stimulus funds, we were able to provide work for two Minnesota companies and save energy and dollars for the residents of Royalton.”

Implementation: On the roof of Royalton’s 12,000 square-foot City Hall, the Rural Renewable Energy Alliance from Pine River, Minn., installed a 7.55 kW solar photovoltaic (PV) system. The solar panels are made by tenKsolar, a Minnesota solar manufacturer.

Outcomes—energy generated: The solar PV array provides about 20 percent of the building’s electricity, and energy efficiency measures such as lighting upgrades help offset another 20 percent, according to Lauer. “In the first year, our total energy usage dropped significantly, and when we did the 2013 budget, we reduced the energy budget line item for City Hall.”

Comparing the baseline year 2010, before the solar PV installation and other efficiency measures, to 2012, City Hall electric use decreased 39 percent from about 50,000 kWh to 31,000 kWh (see chart below). The efficiency measures and solar PV generation combined to reduce City Hall’s annual electric bill by about one third, or $1,700. The PV system is expected to generate nearly 10,000 kWh per year.

Thanks in part to the solar PV system, the Minnesota B3 Benchmarking ratio for the building is 22 percent today, meaning it now uses only about one fifth of the energy compared to a new building built to current energy codes.

Figure 1. This Minnesota B3 Benchmarking chart shows City Hall decreased its electrical consumption by 39 percent from 2010 to 2012.

Documenting results: Through B3 Benchmarking, Royalton is able to track the energy use of its buildings. In Royalton’s case, its PV generation is not submetered. But in solar PV installations where generation is submetered, B3 can track the PV generation. Just click on “Add Meter” and follow the step-by-step instructions. The B3 Benchmarking tool is available for all state, local government, and public school buildings. To add your public building to this database, go to the B3 website and click on “Contact Us.”

Funding: In 2009, Royalton received a Schools and Local Governments Grant funded by the American Recovery and Reinvestment Act of 2009 (ARRA) for its solar PV installation. The solar project was supported by a $33,600 ARRA grant administered by the Minnesota Department of Commerce. This paid for 40 percent of the installation. A $16,000 rebate from Minnesota Power helped fund the installation. The total solar installation cost was $84,000, or $11,000 per kW.

Minnesota’s new solar electricity standard: Several policies designed to increase solar generation in Minnesota were signed into law in May 2013. One of these includes a solar electricity standard requiring the state’s four investor-owned public utilities (representing about 70 of the state’s electric power) to obtain 1.5 percent of their electricity from solar by 2020. Programs were also enacted to facilitate public entities’ investment in solar and energy efficiency.

Resources for local government energy projects: Public institutions seeking energy efficiency and renewable energy measures are encouraged to consult with the Minnesota Department of Commerce, Division of Energy Resources (DER) and their local utility. DER provides technical support to local government units, state agencies, school districts, and institutions of higher learning that are seeking energy improvements. Contact DER to discuss which of its programs can be of help. Utility representatives can help assess opportunities for efficiency and identify rebates to help finance projects.

This year-long effort tells the stories of nearly 50 Minnesota municipalities, counties, and schools and the tangible results of their energy-saving efforts to inspire others to take their own actions. See all stories in this series >>

Local Government Energy Action is brought to you by the Clean Energy Resource Teams (CERTs) in partnership with the Minnesota Department of Commerce, Division of Energy Resource