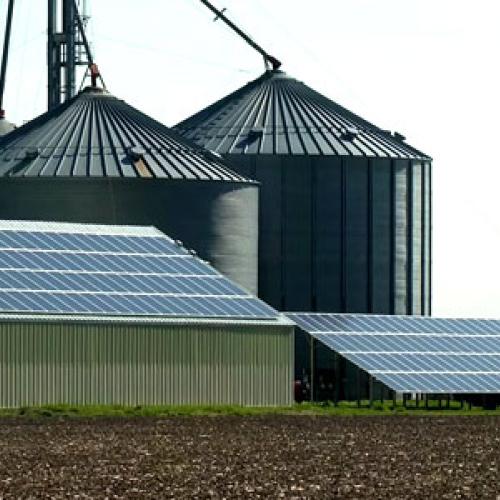 The oldest form of renewable energy probably gets the least publicity as a source for power on farms. Solar power is one form of energy that may make sense for farmers across the country to consider. Mike Guentzel farms at Guentzel Family Farms near Eagle Lake, Minnesota.

Guentzel says, “We put it in because we had the ground space that wasn’t really being used, we had roof space not being used. There’s a lot of programs out there to help us get into it with tax rebates and Excel has a program that helped us out. It really made financial sense.”

Guentzel says that solar power has met and exceeded their expectations.

“It actually powers more than our entire farm. In the fall we don’t make quite enough power. It goes and we take it off the grid, but during the summer and the spring we don’t use as much power so that goes back onto the grid. At the end of the year it’s about a wash, a little better in our favor and Xcel pays us back for that.”

Maintenance has not been an issue for this farm in southern Minnesota.

Guentzel says, “The first system went in three years ago. The second one went in two years ago. We have not done one thing to it. We haven’t so much as hosed the thing off when it got full of corn dust because it sits right next to the dryer. Rain washes them, snow melts off of them, you do nothing. You just let it do its thing.”

Why look at solar power on your farm? For the Guentzel’s, it simply makes dollars and cents.

Guentzel says, “It works every bit as good as we were told it was going to. Nothing’s ever as good as they say and this one really is. It’s a great program and it’s easy to get into.”

Using energy from the sun is nothing new to farmers, in fact, that’s what growing crops is all about. This soybean field that I’m standing in is perfect example. Now more and more farmers are also harvesting the sun to power their farms through solar energy. The unit I’m standing behind here is a perfect example. It will power this entire farming operation and economically, it just seems to make a lot of sense.

See this story at KEYC TV >>