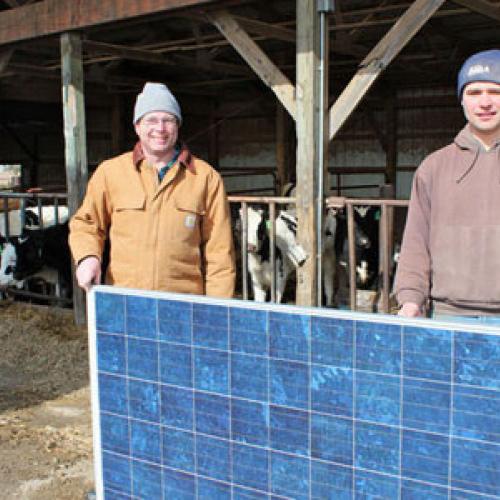 This article is republished from the original by Andrea Johnson, Assistant Editor of Farm and Ranch Guide.

Better technology and lower prices are making solar power in 2014 achievable and more affordable than in the past.

“We’re really past innovators and early adopters with solar and looking at the ‘early majority’ now. The cost of solar has come down a lot, and all sorts of people are now installing solar energy projects,” said Dan Thiede, Clean Energy Resource Team communications manager, University of Minnesota – St. Paul.

Consumers can now purchase solar energy systems for as low as $1 per watt, with added installation costs.

The federal government provides a 30 percent tax credit and some utilities and states provide other incentives for approved solar projects.

“There’s a big interest in helping farms and small businesses in rural parts of the country install solar and other renewable energy systems,” he said.

REAP also funds work to help producers determine how efficiently they are using energy now on their farms and ranches.

There is enough sunlight up here

Those who live in the Upper Midwest and Great Plains may wonder if there is enough sunlight available to make photovoltaic (PV) cells cost effective.

The answer is, yes we do have enough solar resource year-around – but we have to strategically place our solar panels.

Thiede pointed out that Germany has more solar power than any other country in the world, even though most of Germany sits farther north than the Dakotas, Montana or northern Minnesota.

During the winter, one challenge is making certain that snow can melt off of solar panels and not pile up underneath.

“For the most part, the solar panels are really dark in color, so if some light or warmth can get through that snow, it will heat those panels up, and the snow should slide right off,” he said.

The program’s head, Len Kne, worked with CERT and a group of GIS graduate students to develop the Minnesota Solar Suitability App.

Using LIDAR (Light Detection and Ranging) data and GIS technology, the team developed a map that shows solar potential with 1 square meter of resolution for all of Minnesota.

“Minneapolis, New York, Boston and several other cities have done similar analyses, but these efforts have been limited to individual cities,” he said. “This project is unique because it maps solar potential for the entire state of Minnesota.”

Available at http://solar.maps.umn.edu/app, users enter an address and click on an icon to see if solar radiation per square meter is poor, good or optimal – which is about 3 kilowatt hours per square meter per day.

Users will quickly realize the importance of placing solar panels on south-facing roofs or open areas devoid of trees or tall buildings.

The Minnesota Solar Suitability App uses the average amount of solar potential across the entire year.

“The best solar resources are in the summer months when the sun is higher and more directly overhead. There is a slight decrease in solar resource in the winter months,” he said.

These include Nathan Gibbs of Altura, Minn., who installed a 39,840-watt PV solar system that supplies about 30 percent of his dairy farm’s needs. The system’s cost before incentives was $4.62 per watt. Gibbs collected a $2.25 per watt rebate, a 30 percent federal tax credit and accelerated bonus depreciation.

Eichten’s Organic Cheese Farm in Chisago County is installing a 1-megawatt community solar garden. A solar garden is a large solar array where many people purchase subscriptions to support solar energy generation. The new array will include 3,000 solar panels at Eichten’s Farm.

“Anyone who has electricity needs for lighting, for equipment, for refrigeration – solar is a great way to provide electricity,” Thiede said. “It’s nice for farms and ranches too because a lot of the time, they have plenty of space – or barns with big, flat roofs. Solar can be a great fit.”

Visit http://solar.mncerts.org to learn more about solar energy, and how it can fit your farm or ranch operation.