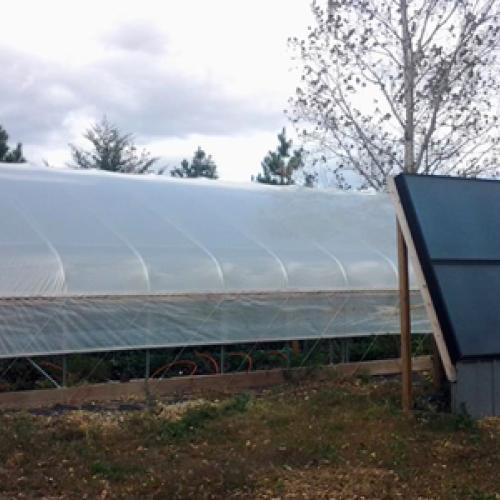 High tunnels (also commonly referred to as polytunnels, hoop greenhouses, or hoophouses) are large, generally semi-circle-shaped structures made of polyethylene. Main benefits derived from using the tunnels include shelter from extreme weather and simultaneously being able to trap solar heat and retain warmth. From the fall of 2012 to spring of 2013, the Rural Renewable Energy Alliance (RREAL) investigated not only high tunnels, but also their performance when paired with an open-loop-air recirculation heating system, and with a solar-powered furnace (SPF) heating system.

“High tunnels are an excellent tool for growing crops in cold weather,” explained Adam Kuthart, solar engineer at RREAL. He continued, “By capturing solar energy during the day and providing protection from wind, rain, and snow, high tunnels allow plants to grow for a longer portion of the year.” 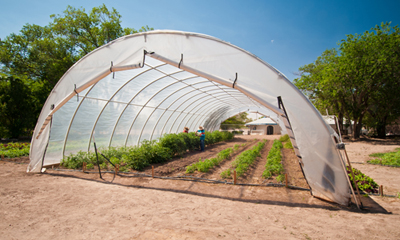 A downfall to high tunnels is how rapid their inner temperature drops at night due to low soil heat absorbsion during the day. However, heat loss can be remedied. Kuthart noted, “The growing season can be extended further by pushing warm air through the soil. This warms the soil around the roots, and reduces the daily temperature swings inside the high tunnel since the soil radiates heat during the night.”

The study conducted by RREAL included three different high tunnels. The first tunnel was stationed in King Gardens in Longville, MN. This tunnel contained no additional heating mechanisms and served as a control for the research. The second tunnel, also in Longville, MN, has an open-loop-air recirculation heating system. “Warm air is drawn from the top of the high tunnel. Air can collect additional solar heat as it passes through an 18”plenum painted black on the south side before it goes through a network of drain tiles buried in the soil,” explained Kuthart. 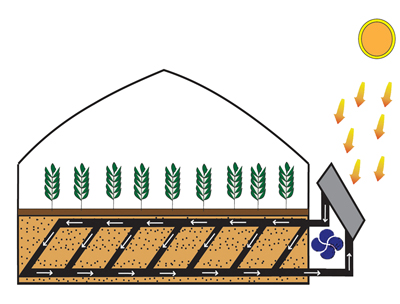 The third and final high tunnel, located on Richard and Valeria Staus’ farm in Hastings, MN contains a solar-powered furnace (SPF) system. In this system, two SPFs in parallel pump air through a closed system with two layers of 4” corrugated drain tile, spaced 16” apart. The first layer of tiles is at 18” and the second at 36”.

RREAL hypothesized that both types of heating would enable a longer growing season than the high tunnel with no supplemental heat source.

When the results came in, they weren’t entirely what RREAL had predicted. By comparing the control high tunnel to open-loop soil heating, the study found that the open-loop soil was a couple degrees cooler during the day and a couple degrees warmer during the night. For the open loop system, the slight temperature advantage at night was far more beneficial than the few degree deficit during the day. “A hard frost is when temperatures drop below 28°F for several hours, and this can damage many types of plants. We observe that the heated soil allows the air to stay above this level while the standard high tunnel goes through an early season frost,” explained Kuthart. 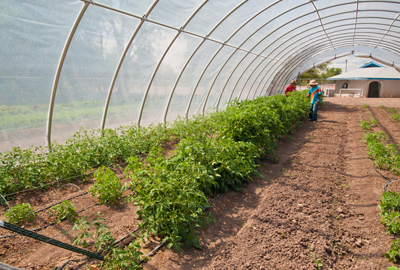 When comparing the SPF system to the open loop system, RREAL found “the SPF system appears to have much warmer soil and air temperatures, but this may be due to weather differences between the two systems,” confessed Kuthart. “The average monthly temperatures for January through March are 7-9°F warmer in Hastings than Longville. This is about the same difference that is shown in these graphs, so it’s not clear if one system is more effective than the other.”

While the results didn’t turn out quite as expected, Jason Edens, Project Manager from RREAL, has a positive outlook. “One of the most successful aspects of the project was the fact that we were simply able to increase the data set for this emerging application. Without additional data, it is unlikely that this possible technological coupling will grow to its full potential,” expressed Edens.

Looking to the future, Edens said, “There is much to do, and we are eager to do it! The evidence suggests this will be a promising application for colder climates. This research and other current research efforts are certainly building momentum.” Recently, RREAL secured additional funding to conduct a more formal and controlled experiment. Edens explained, “We are currently constructing four highs tunnels, two with solar heat and two without. The project will produce a robust data set and the opportunity to draw some more firm conclusions about the efficacy of the application.” Both RREAL and CERTs are hopeful that the results of the upcoming study will be decisive and encouraging.