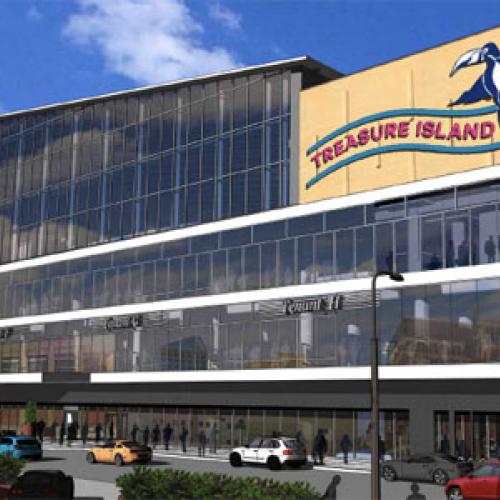 The state of hockey goes wild for PACE financing

Go Wild, LLC secured $6.74 million in PACE financing as part of its capital stack for the Treasure Island Center redevelopment project in Saint Paul, Minnesota. PACE funds will be used for energy efficiency upgrades that are projected to cut utility costs by 40 to 60 percent, decreasing from $1.2 million per year to between $480,000 and $720,000.

Treasure Island Center is a major, mixed-use redevelopment project scheduled for completion this fall. The former Macy’s department store in downtown Saint Paul will now be home to TRIA Rink, a fully enclosed rooftop ice arena that will be used by the Minnesota Wild as a practice facility. Other uses include a two-story Walgreens, Stacked Deck Brewing, a TRIA Orthopaedic medical clinic, offices for the St. Paul Police Department and the Minnesota Housing Finance Agency, a fitness center, a restaurant, and an event center. The former department store, built in 1963, covers 2.5 acres with 540,000 square feet of space.

By working with Xcel Energy, the developer has committed to a number of building-wide, energy saving investments including: increased insulation; improved HVAC; new motion-controlled and LED lighting; and a new domestic water infrastructure.

A total of $9.2 million will be invested in energy conservation measures, with an expected payback of 17.4 years. Expenses above and beyond the 20-year PACE loan will be absorbed by other project funding sources, which include energy rebates, TIF and a construction loan. The PACE loan was funded by the Pace Loan Group, a national funding source based in the Twin Cities.

Download this article in PDF and learn more in an article by the Pioneer Press.