Two Rivers Habitat for Humanity is on track to complete two certified Zero Energy Ready (ZER) Homes this summer, one in Rochester and the other in Claremont.

These homes will be so efficient that a renewable energy system could offset most or even all of their energy consumption. Though these Habitat homes won’t have solar electric systems, the reduced energy operating cost will be a great benefit to a low-income family living there. DOE research indicates that while a ZER home might cost up to 8% more to build, because it is 40-50% more efficient, it could save as much as $100,000 on utilities over the period of a 30-year mortgage, and net a positive return.

“The energy efficiency starts below ground on this split-level home with 4 inches of foam insulation under the concrete floor and insulated concrete form (ICF) foundation walls above”, said Wimmer. Both provide an insulation value in the R20s, and for comparison, the current building code requires no insulation below the slab and only R15 for foundation walls. The higher the R value the stronger the insulating power. Wimmer then pointed out that the exterior walls were wrapped with three inches of foam board applied to stop 'thermal bridging'.

“Studs in a wall conduct heat and create a bridge which reduces the insulation value of the whole wall, but a solid wrap of foam breaks the bridge.” The Habitat home’s walls will come in a little over R26, exceeding the code R21 value.

Wimmer has been building homes for Habitat going on 14 years, but in the last few became obsessed with energy efficiency. He’s studied up with resources from the University of Minnesota’s Cold Climate Housing Program, and the Building Science Corporation’s principles. He has been putting what he’s learned into practice making each of the last four homes Two Rivers Habitat has built progressively higher performing.

Wimmer seems to have found the perfect collaborator in Lou Behrens who began to volunteer at Habitat a couple of years ago. Lou is a retired commercial energy efficiency consultant.

Lou described the air-tight framing techniques used in the home, which they hope will reduce the air infiltration to less than 1/3 of what is allowed by code. Gaps that allow air to leak in or out of the average home can increase energy costs by 30% and also cause moisture problems. In the Rochester Habitat home, the sheathing was glued to the studs so there were no gaps, seams in the sheathing were glued and blocked, any remaining gaps were caulked, seams in the vapor barrier were taped, and even the ductwork had an aerosol based sealant applied.

“We recently acquired blower door equipment and will be able to test the air-changes per hour several times as the construction progresses, in order to correct any issues before the finish work”, said Behrens. 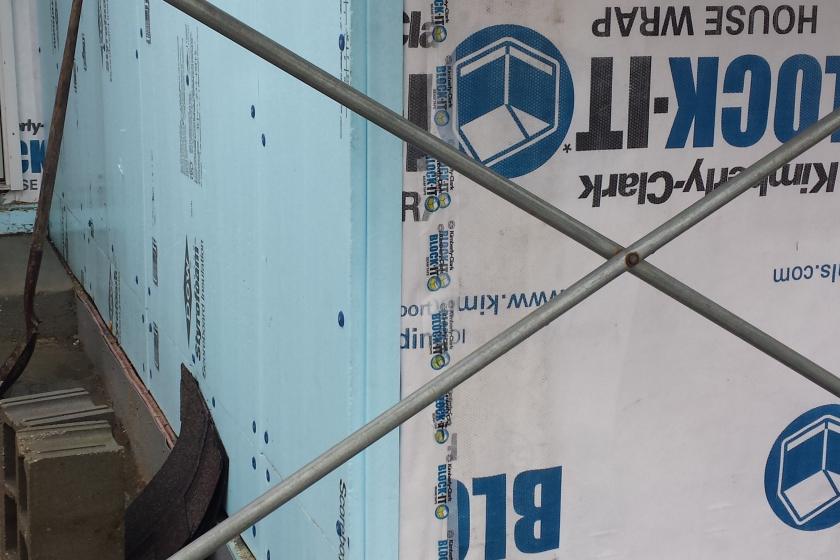 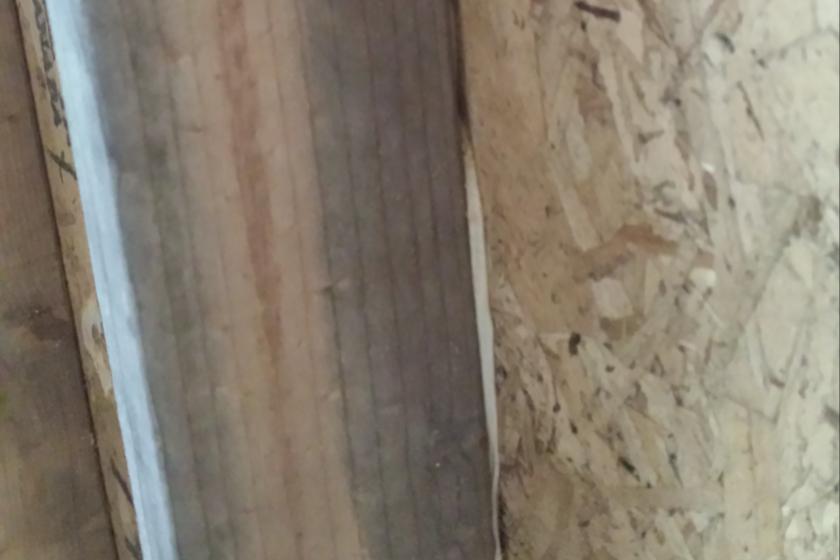 The energy efficiency starts below ground on this split-level home with 4 inches of foam insulation under the concrete floor and insulated concrete form (ICF) foundation walls above.

When asked about the biggest hurdle to building an energy efficient home, both Lou Behrens and Brian Wimmer (pictured here in front of one of the homes) agreed lack of information and training were the issue.

“We train our volunteers to watch the details but our sub-contractors aren’t generally aware of how important air sealing and insulation are,” said Wimmer. Behrens smiled and pointed out a seam in the wall where daylight could be seen. “Our electrical contractor removed the block from this seam to install the outlet box and just didn’t replace it.”

Behrens also said these homes are likely to attain a Fortified Standards certificate when done. Fortified homes have special features designed to help them withstand natural disasters, in this case special strapping and clips to keep the walls and roof secured in high winds.

The home has an efficient, but standard, natural gas furnace and will use a heat recovery ventilator (HRV) because of its air tightness, but Behrens and Wimmer are enthusiastic about new developments in HVAC (heating, ventilation, and air conditioning) technology. Wimmer learned about super-efficient ducted mini-split air-sourced heat pumps at a recent conference in Duluth. “A robust enough building envelope might create a cost-effective way to transition to electric heating” he said. Behrens interjected, “I recently got access to the WrightSoft HVAC design software and in the next house should be able to do the system calculations to support the use of a distributed HVAC system like the ducted mini-split.” Behrens motioned to the lot next door, which is where the next Rochester Habitat home is to be built.

There are currently about 2,000 Zero Energy Ready Homes in the US, and these two Habitat homes are part of the 10,000 more that are currently under construction or in the process of certification. If Wimmer and Behrens are successful they will add more to that number in years to come.