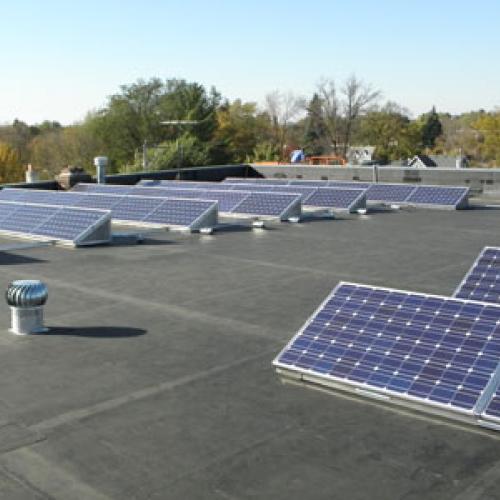 Heading into Lester Prairie from the north, one is likely to see Jerry Stibal’s new set of solar panels just off Babcock Avenue.

“Last year, with fuel prices so high, I decided it was time to do something different,” Stibal said.

Construction for the panels started the beginning of November, and they were ready to go about three weeks later.

“It didn’t take long,” Stibal said. “It helped that we had good weather.”

Stibal anticipates a quick payback period for his investment – 4.8 years.

“We based everything off last year’s prices,” he said, explaining that the actual payback time will depend on future energy prices.

“It also depends on the year; if you get all cloudy days, it’ll output less,” he added.

“At first, I was attracted to the windmills,” he said. “But after studying it, it just wasn’t penciling out right.”

Holasek and Angvall have had their systems in place since 2010.

As of January 2013, Angvall’s solar panels had generated 30.6 megawatt-hours of power. His display is expected to generate 95 to 105 percent of the electricity for the hardware store for the next 30 to 40 years. The store’s solar energy production can be tracked online at http://enlighten.enphaseenergy.com/public/systems/crFM10513.

Energy outputs for Holasek’s can be found at www.holasekflowerpower.com by clicking on the “links” tab and going to “Enphase Energy.” According to the site, the greenhouse had produced a total of 30.9 megawatt-hours through January 2013.

“Those guys have had good success and were really satisfied,” Stibal said.

Encouraged by Holasek and Angvall’s results, Stibal began compiling data for his own property.

He also converted the heating system in his home, and at his wife’s business, Woodland Beagles.

“We took out our gas boiler, and the whole yard is now run off electricity,” Stibal said.

To determine the number, size, and type of solar panels Stibal needed to power his home and beagle business, Xcel Energy performed an assessment of his previous three years’ usage.

“Xcel was really easy to work with,” Stibal said, adding that he also received a substantial grant from the company.

According to Xcel Energy’s website, 224 people have participated in the company’s Solar*Rewards program (as of Nov. 25, 2012), with payment incentives totaling more than $7 million. Anyone interested in learning more can e-mail solarprogrammn@xcelenergy.com.

Output is directly proportional to the amount of sunlight available. According to Xcel, a system can still generate 50 to 70 percent of its typical output under bright overcast conditions.

On short, cloudy winter days, Stibal will most likely need to purchase some electricity from Xcel. However, he expects to make up for it during the long, sunny summer months.

“I’ll be making more than I can actually use in the summertime,” he said, explaining that excess power goes back to Xcel, and he gets paid for the difference.

“At the end of the year, everything should zero out,” he said.

Stibal’s system also qualified for a 30 percent federal tax credit. According to Energy Star’s website, the tax credit has no upper limit, and is available through Dec. 31, 2016. To learn more, go to www.energystar.gov.

Learn more in a case study from the install, Innovative Power Systems >>