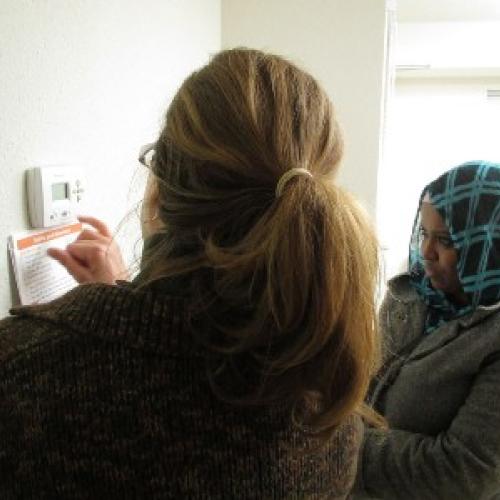 The idea of high-level sustainable living for residents of apartment buildings has been a concept in the minds of some in the Twin Cities metro area. Aeon, a non-profit organization, thought about transforming that concept into reality in their apartment housing properties. According to their website, Aeon is “a non-profit developer, owner, and manager of high-quality affordable apartment homes for individuals and families with low to moderate incomes and formerly homeless individuals”. Gina Ciganik, Vice President of Housing Development, felt that Aeon as an organization was making strides in sustainable programs, but felt that things could progress into something bigger, stating, “I wanted to find a more holistic approach to developing and operating high-performance, truly sustainable buildings”.

Ciganik formed a team to begin a pilot project, with a specific goal in mind: gaining leadership and interest among residents to engage in sustainable behavior change. Ciganik stated that if the residents, “are provided with information, encouragement, and the tools to live a more sustainable life, we can have far greater success”. Another concept explored in the pilot project was to investigate and determine the best ways in which to design residential housing properties that required the least amount of behavior modification for residents. Ciganik explained that, “if we designed it right then people would not have to modify behavior because the default action is the one we want”. Implementation for Aeon’s Residential Engagement Sustainability Pilot Program began at The Wellstone apartment community in the fall of 2011 and concluded in early 2012.

Other partnerships and team members for the pilot program that collaborated on the team included Becky Yust from the University of Minnesota Housing Department, who helped guide the team and created curriculum for the residents; Billy Weber from the University of Minnesota’s Center for Sustainable Building Research, who assisted with research and data; Cummins Power Generation, which assisted in Six Sigma practices and completed data analysis and general assistance; Hope Community, which managed resident organizing and helped with education opportunities; and various Aeon staff who worked on all facets of the project. The project also had the helping hands of over 20 volunteers. Together, the team conducted the pilot to learn about the best practices for resident engagement and creating measurable change.

The Wellstone is a residential building that was built in 2008. It has many sustainable features, including programmable thermostats, low flow shower heads, faucet aerators, and a solar thermal unit on the roof. The Wellstone was selected as the site for Aeon’s pilot project, because the organization wanted to focus on behavior change instead of making physical changes to the building or its housing units. Only one physical item was implemented in half of the units: energy feedback meters, to learn if residents who had immediate access to their energy usage data would be more likely to conserve energy. 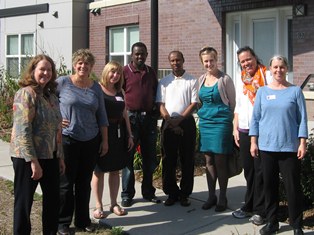 During the planning phase of the project, in order to gauge the knowledge of the residents and what direction the pilot should move in, the team conducted initial interviews with residents of The Wellstone. Ciganik reported valuable information from the feedback they received, saying that, “By conducting interviews with residents before planning programs, for example, we learned that more than half of respondents had never heard the terms ‘green’ or ‘sustainable’ before. Even when they had, some explained green as ‘I know this building is green which means it was built using recycled materials and is of low quality’ and ‘Does it have something to do with clean?’ Our Sustainable Living Program was designed with the goal of bringing new information to residents, debunking myths, and encouraging behaviors that will reduce costs of living and improve health“. Educational workshops were conducted as outreach to residents to influence lifestyle changes related to energy and water usage, as well as recycling. These workshops were well attended, and they educated residents on various sustainable living practices, including energy conservation.

In total, ten informal outreach activities were held, seven formal workshops were conducted and one kick-off session was held. Two residents emerged as resident leaders and helped champion the project. Thirty-five out of forty-nine units at The Wellstone had resident attendees attend at least one activity! Total attendance included 137 adults (some of whom attended multiple activities). Residents were welcome to bring their children to the activities, and more than fifty children also attended alongside their parents.

Ciganik said that currently, the team is still assessing the program’s results and determining the methods by which, “to bring the work to scale” and implement widespread changes at other Aeon residential properties. She went on to state that, “As Aeon and our partners worked with residents and hosted informal and formal educational sessions, we continued to learn about best practices for this work. For example, we learned that work on sustainable living cannot be successfully addressed unless more basic needs are met, such as ensuring all residents feel safe in their buildings and apartments. We are working to integrate lessons like these as we develop a replicable model that can be rolled out to our other properties. Final data will be critical in informing future efforts to begin similar programming”. 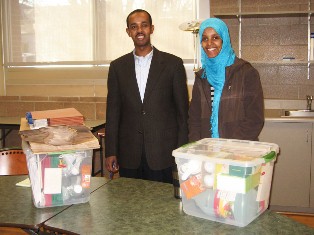 Contributing to the success of the pilot project was the development of resident leaders to champion social norming in the community. This enabled an insider approach, allowing for a more personal interaction and avoiding a potentially less effective owner to resident approach. Ciganik mentioned that, “Resident leaders are much better able to affect a change in a property’s culture of sustainability”. Additionally, other elements of the project’s approach were imperative to success, including initial interviews with residents to identify habits and values related to sustainability; forming an education committee, which reviewed all materials in terms of content, clarity and cultural context; holding informal sessions in the lobby to lend visibility to the project; having props for visual demonstrations; having an interpreter present so that residents can speak and ask questions in their native language; arranging chairs in a circle, which encouraged openness and communication; using handouts instead of projected presentations to make things more informal and accessible; and offering daycare and activities for children to engage in during the workshops.

In addition to these successes, project leaders faced some challenges. Initially, the team introduced a number of topics to the residents in an effort to inspire change. Later, the team felt it might be more effective to incrementally introduce topics to avoid overwhelming residents with information. As residents felt comfortable with the concepts and materials, they could move on to other topics. Other challenges included workshop attendance, new resident orientation, and accessing resident utility data. These challenges led the team to incorporate information into residents’ daily lives, establishing an educational norm for the residents. They also are continually working with residents and the utility company to have better access to residential utility data.

Although final energy data has proven hard to obtain, the team quickly realized that several years of data would need to be collected to measure change. Additional analysis was completed to see if energy or water usage had any relation to unit size or location within the building, with results reporting that no correlation existed, demonstrating that behavior modification is integral to measurable change. “Ultimately , it was clear through this program that our residents are interested in saving money and having a smaller ecological footprint” said Ciganik, which signals that even though quantitative results are not available for the energy data at this time, residents have demonstrated willingness to learn about sustainability issues and desire to change their habits and save money.

Ciganik believes that behavior change will not only create a reduction in energy costs at The Wellstone, but said that when residents move out, they will take their new habits and information to other homes and communities. As for the future, the goal is to expand the programming to more Aeon properties in the Twin Cities Metro area. Additionally, through the pilot program partner organizations, the program goals will reach other residents in the Metro region, which will aid in establishing new social norms around sustainable energy behavior.

For more information about the Sustainable Living Pilot Program, please contact Gina Ciganik at (612)746-0545 or by email gciganik@aeonmn.org .