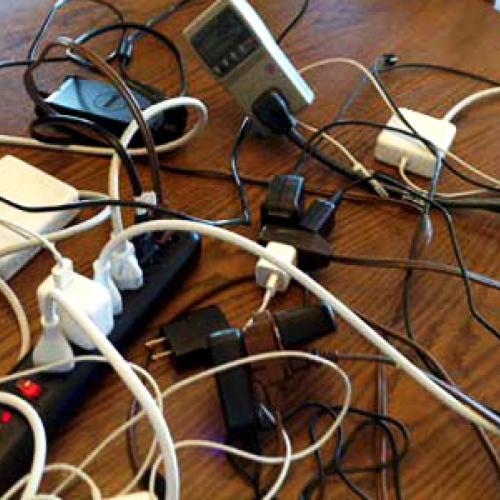 Is there phantom power usage in your home?

Dr. David Schmidt of the University of Minnesota’s College of Food, Agricultural and Natural Resource Sciences is practicing what he preaches. The professor of the popular Renewable Energy and the Environment course has conducted his own study on phantom power in the home.

Phantom power (also referred to as standby power, vampire draw, or leaking electricity) is the act of electrical appliances consuming power while switched off or in standby mode. Schmidt ran an in-home experiment with a Kilo-Watt meter and tested items such as laptops and phone chargers.

Schmidt began the experiment by plugging only the power cords (chargers) for 4 laptops, 2 cell phones, 2 iPads, a Nook, a Nexus, and an iPod all onto the same power strip. (See above right photo). Even with all of these chargers plugged in, the meter read 0 Watts.

It’s hands-on projects like the one Schmidt conducted himself that he encourages students to undertake. The online-only course (Renewable Energy and the Environment) boasted an enrollment of 600 last spring and teaches students about topics such as life-cycle analysis, climate change, forms of clean energy, and energy policy. One of the course requirements includes a “Do Something and Report It” assignment. For this assignment students must do a small project based off of course learning and then report it back in the form of a fact sheet, news article, Powerpoint presentation or video. Previous projects have included videos showing students making solar iPod chargers, making biodiesel, auditing their homes’ energy use, or melting cheese on a tortilla using a homemade solar oven.

After completing the projects, Schmidt requires the students to watch their peers’ videos and comment on the presentations. The collective viewing allows the students to see different areas of action to which they can personally relate. Schmidt emphasizes that the class is not just for school, but for their life’s well being.