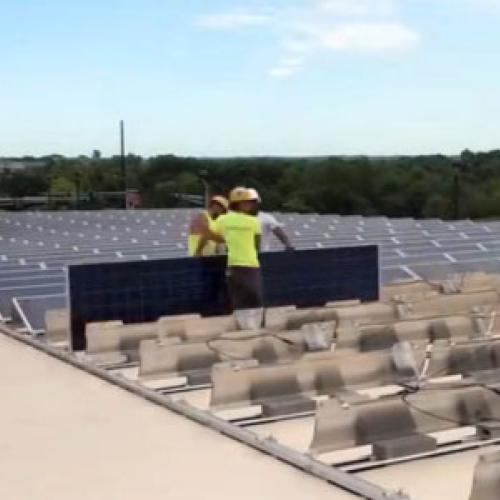 This article is being re-posted from the original at Midwest Energy News by Frank Jossi.

A new solar installation added to the parking garage roof of a Twin Cities apartment building the largest investment in renewable energy at a multi-family housing site in Minnesota. The 148 kilowatt (kW) project at CityVue Apartments in Eagan sits a top a parking lot next to the 11-story, 113 unit building. The building owner, At Home Apartments, is on schedule to install more than half a megawatt – 526 kW – on the roofs of garages and buildings it owns this year alone.

Alan Spaulding, who owns the company with a partner, said $1.6 million will be spent on a dozen more solar installations this year that collectively could power roughly 140 apartments.

“We thought we could make a meaningful contribution so that when we add (solar) to our marketing platform it’s not just paying lip service to being green,” he said. “Additionally, in my view, there’s a perfect storm. The cost per kilowatt has come down. There are good public subsidies for it.”

Spaulding says there’s a business case for the installations, too. The green living pitch can be seen now on the company’s website. If a client is on the edge of signing a lease the solar panels may show At Home as a “good corporate citizen…it’s one of those intangible items we might get credit for. There’s no negative.”

Nor is there much of a downside to adding solar because the interest rates are low and lenders see it as a good investment that increases the value of the property while reducing its operational costs, Spaulding said.

Lenders offered the company interest in the mid-three percent range, he said.

Innovative Power Systems Eric Pasi worked with At Home on the solar program. Since most apartments are individually metered, most multi-family housing owners and developers who install solar do so only to cover common areas.

The company has installed solar for a handful of other apartment owners. “You don’t see a ton of multi-family buildings doing solar,” said Pasi, whose company is doing At Home’s installations. “They are doing more than what we’re seeing from other apartment complex owners.” You can watch a time lapse video of the installation at CityVue by IPS below.

Dan Thiede, communications manager of the Clean Energy Resource Teams, said he had not heard of any other building owner with as aggressive a plan for expanding solar as At Home.

Most solar installations by developers and building owners have been “one off” projects rather than part of a series of expansions, he said.

Some public housing agencies are investing in community solar gardens, Thiede noted, but those will not always be located next to or on top of their properties.

At Home had been buying bulk power from Dakota Electric Association, a local cooperative. The power created from the 450 panels is fed directly into the building and will likely cover 20 percent of the electricity needs, he said.

Dakota Electric’s senior electrical engineer Jeff Schoenecker said the utility has 60 solar projects, all of them much smaller than the CityVue installation. Interest in solar is growing. “I can’t say we’ve heard from any other apartments but we are getting interest from school districts,” he said.

At Home used existing solar programs on the CityVue project but it will take the federal 30 percent investment tax credit and a quicker depreciation that reduces the cost of the panels by half, Spaulding said.

At Home’s other projects are employing subsidies offered by the Made in Minnesota Solar Incentive Program and Xcel Energy’s Solar*Rewards program.

The company applied for 40 MiM projects and won funding for seven. Operated by the Department of Commerce, the MiM program offers participants who buy solar panels manufactured in the state a higher per kilowatt payment for the power they produce.

The program limits commercial solar installations to 40 kW but Spaulding said that has not been an issue because the size of the roofs in his apartment buildings could not hold larger installations.

“Apartment roof sizes aren’t that big and not many that can take larger than 40 kW installations,” he said.

He has five projects in Xcel’s Solar*Rewards For Business, which offers an incentive for installing panels. The program caps each installation at 20 kW, he said, so he’s putting them on smaller buildings and garages.

Unlike the CityVue project, the rest of the buildings will use solar produced power for common areas of apartment buildings because tenants pay their own electricity bills.

Garages are particularly well suited to solar panels, he said, because they have fewer intrusions such as plumbing stacks, air conditioning unit, chimneys and other hindrances.

What some businesses have begun to understand is that roofs represent “underutilized real estate” that could produce revenue, said Pasi.

It’s a point not lost on Spaulding. Every roof that gets replaced in the future will have solar panels added. Looking toward the future, he said every year five to six roofs covering the more than 5,200 apartments the company owns will be replaced.

A five-story second phase of CityVue is being built, with 122 units, and it may get solar panels at some point. But for now the focus is on adding them to new roofs on existing apartments. It owns more than 5,200 apartments in dozens of buildings.

This article is being re-posted from the original at Midwest Energy News by Frank Jossi.