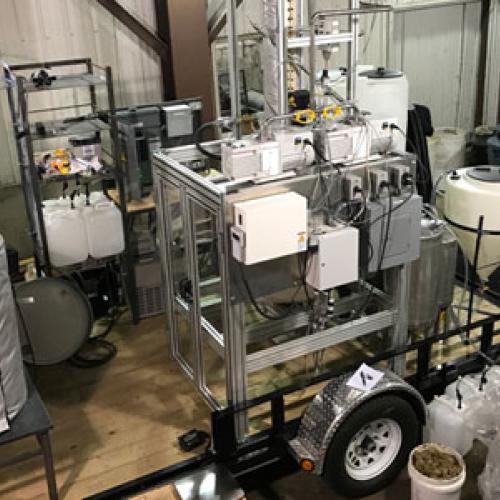 U of M researchers turning wastewater scum into profitable biofuels

An innovative pilot project at the University of Minnesota looks into taking scum from waste water treatment plants and turning it into biodiesel that could be used in on-site vehicles.

Scum, a white, muddy byproduct produced in wastewater treatment facilities, presents significant disposal challenges. Typically scum is treated either by anaerobic digestion to produce biogas, which has low energy density, or disposed of in a landfill, which causes many environmental problems. However, the process developed by Ruan and Anderson converts scum to biodiesel that can be directly used in utility vehicles on-site, leading to substantial cost savings.

The patented process not only converts the scum to a higher value product (biodiesel) but also reduces environmental pollutants in both landfills and water systems. As a result, 68 percent of dried and filtered scum can be converted to biodiesel, equivalent to approximately 140,000 gallons of biodiesel and $500,000-600,000 in profit per year. Additionally, the process utilizes available waste heat from water treatment facility.

This research was funded in part by grants from the Legislative-Citizen Commission on Minnesota Resources (LCCMR), Metropolitan Council Environmental Services, MnDRIVE and CFANS Center for Biorefining.

Anderson and his team used scum from the Metropolitan Wastewater Treatment Plant in Saint Paul and processed it at the research pilot processing facility at the University of Minnesota’s Rosemount station.

The team is hopeful that the Metro Plant will soon be ready to install the process after pilot-scale testing is complete. The Metro Plant produces roughly 3.5 tons of wet scum each day. Assuming a constant supply of scum material over a 365-day period, a yield of between 189,000-216,500 gallons of usable oil could be produced annually. At the conservatively estimated process efficiency of 68.8 percent, the scum oil could yield between 130,000 and 149,500 gallons of biodiesel each year.

“Using a free oil source combined with the lack of transportation and handling costs makes a scum to biodiesel process very attractive financially,” said Anderson. “Scum oil is not only free, but is considered a waste material. By converting most of the scum to biodiesel, and part removed as either distillation bottoms or filtered solids, the process saves a majority of the liquid organic scum from a landfill. That’s an immediate savings of more than $150,000 per year in costs associated with landfilling scum at the Metro Plant, in addition to the revenue generated.”

If the finished biodiesel is used directly, it can be valued at the same price as the petroleum diesel, roughly three dollars per gallon, offsetting the purchase of an estimated 145,000 gallons of biodiesel saves the Metropolitan Council approximately $435,000 in fuel costs alone.

The unique scum to biodiesel conversion technology not only pertains to scum conversion but also offers improvement opportunities to commercial biodiesel plants. Ruan and Anderson are excited about the commercial interest in the technology and broadening its application.

For example, Resynergi, Inc., a California waste recovery company, sought out Ruan in 2015, and, with a license for Ruan’s technology for biomass conversion, is now developing and commercially manufacturing a biorefining system that converts both biomass and plastic into oil and gas.

And in Minnesota, Xcel Energy is providing a $1 million grant to study the microwave gasification process. “We’re pleased to work with the University of Minnesota on this technology,” said Laura McCarten, regional vice president – Xcel Energy. “We support the research and development of innovative renewable technologies that build a better Minnesota.”

See the original post from CFANS at the U of M.