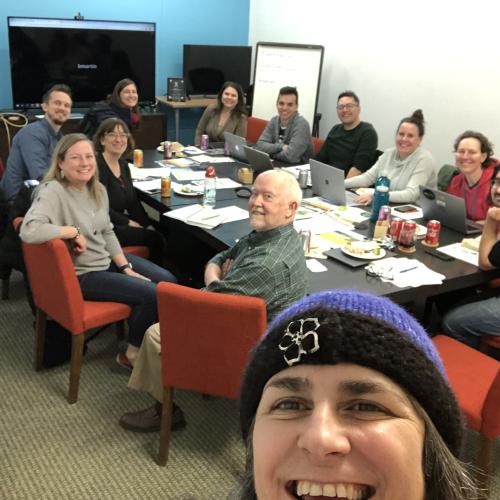 Metro CERT is excited to welcome four new members to its Steering Committee!

We were able to have one in-person meeting with our newest members before the COVID-19 emergency got underway. As we welcome these new members, we asked them to introduce themselves, share how their lives have changed, and what they’re doing to adjust during this unprecedented time. Read on to learn about their diverse backgrounds, what drew them to clean energy and CERTs specifically, and a little-known fact about each of them.

Ralph describes himself as a semi-retired energy and building engineer, grandfather of six, father of two, husband of 50+ years, a would be fisherman, environmentalist, lover of baseball and a DIYer. He was born, raised, and attended college (BSME) in Wyoming. Graduate school at the U of M brought him to Minnesota.

Regarding his interest in clean energy, Ralph explained, “I was raised in an oilfield town with lots of oil production units (rigs) around. Lots of environmental messes, no clean up and that bothered me and influenced my interests in energy, efficiency, clean energy and helping homes and businesses with less energy and, of course, accountability for creating equal or more clean up issues.”

Ralph’s interest in CERTs and the Steering Committee come directly from his work with the Retiree Environmental Technical Assistance Program (RETAP). He has been active with RETAP for a couple of years. CERTs has helped generate considerable contacts with businesses needing conservation assistance. Most of this activity has occurred in greater Minnesota but they also recognize a lot of metro business opportunities. Secondly, RETAP is beginning to do solar screening analyses which may lead to CERTs assistance and other forms of technical and financial guidance.  In his role on the Steering Committee, Ralph hopes to encourage more communication between RETAP and CERTs and believes cross pollination will be helpful.

The “stay at home” order has essentially shut down the new energy conservation/renewable projects that Ralph would be working on through RETAP because the projects start with a site visit and extensive information collection.  He is anxious to get back to work and sees lots of challenges to get RETAP activities back to pre-Covid levels. Additionally, he foresees a lot of customers not resuming business, and those that do, being too preoccupied with survival to get involved with efficiency and energy issues. Ralph expects it to be slow going as we get re-started.

To cope with the current situation, Ralph is using the time for catch-up on personal things and professional projects. He normally has grandkids at his house so the combination of “stay at home” for grandkids and no traveling for RETAP projects allows him to do other things.  He is now doing some woodworking (new doors) for his son’s house.

One of Ralph’s unique experiences to share is that he has been in seven MN State prisons as a consulting engineer doing energy conservation work.

Carmen is a proud Minnesotan and has been working for the Citizens Utility Board of Minnesota as their Outreach Director since 2016. She grew up on a farm in Northwestern Minnesota, spent sixteen years living in various places in the US and abroad, and was very happy to return to Minnesota over seven years ago. She currently lives in the west Metro and loves singing the praises of living in Minnesota.

Carmen’s interest in environmental issues goes back to her childhood and was influenced by her family. The cold, strong winds on the northwestern prairie inspired visions of wind turbines in her imagination and she loves seeing them in real life. In her role at the Citizens Utility Board, she regularly talks about clean energy options with consumers. She’s excited to be on the Steering Committee and share a consumer advocacy perspective on energy efficiency and clean energy topics. Carmen also loves connecting people and resources and Metro CERT is a great place to do that.

Normally you would find CUB’s Outreach Team out and about at events, giving talks, and doing in-person energy bill consultations. COVID-19 has required shifting all outreach work remotely, either on the phone or via video-conference. CUB is spending a lot of time helping people who are concerned about paying their energy bills. Carmen finds it fulfilling to provide energy and money-saving guidance to households during this troubling time.

Carmen is feeling fortunate to be able to work from home and grateful her kids are in middle and high school so distance learning is more manageable. Walks by Lake Independence, take-out once a week, Friday family movie night, and the antics of three cats are adding some comfort and fun during the stay-at-home period.

While living in Indonesia as a young adult, Carmen was recruited to be in a tourism commercial at a national park. During the filming, Carmen rode an elephant through the jungle. Upon reaching a steep hill, the elephant surprised her by dropping to its knees and just slid down! It wasn’t the ride she was expecting and different than going down a sledding hill in Minnesota!

Anders Thulin was born and raised in Sweden. He has lived in variety of places including Sweden, Texas, Denmark, California, Washington DC, and now Minneapolis.

When asked about his interest in clean energy, Anders replied “I’ve always been passionate about the sustainable development, and believe that access to energy, water, and information are keys to success. Given that energy is a pre-requisite to the other two pieces, clean energy is required to bring those less well off to a more equal playing field without sinking the climate in the process.”  Anders joined Siemens’ wind power business in 2012 and has since transitioned to electric vehicle charging infrastructure in 2018. His tasks have centered around lowering the total cost of both wind power and EV ownership.

As a local of Minneapolis, Anders wanted to be involved with CERTs and contribute an “industry view” for its endeavors. Anders feels Minneapolis has been great place for him and he wants to help pay it back in a way where he can be helpful. He appreciates that CERTs is community organized and driven and that it has a non-political agenda. He wants to help out with all EV related topics, renewable energy, and grid aspects. Additionally, he lives next to a great donut place so is happy to bring treats to meetings!

Anders’ work continues despite the changing working conditions. He is working on some big projects and shared, “It’s a lot of fun sitting with various stakeholders to try to figure out what makes most sense for their needs. It’s complicated and involves a lot of participants, but it looks like we’re making it work remotely, which is great for cutting down on cost and emissions!”

He expects, just as with most industries, that there will be a bit of a delay in projects. He also believes that COVID has shown us some light in the darkness. For example, it’s revealed the environment impact of fewer emissions. People are seeing mountains they didn’t know were there. Previously poisonous rivers are now almost drinkable out of the stream. This was a shift that happened in a manner of a few weeks. He asks us to imagine if we made this sort of impact permanent? He thinks the opportunities are there, and it’s on us in the industry to make electrification simple to understand, and transparent in its cost effectiveness.

Before working in the energy sector, Anders was a bicycle courier in downtown Stockholm for two years. He went into the ER three times and was in a total of eight accidents, snapping two helmets in half. Needless to say, he didn’t make a career out of it!

Mateo describes himself as a Chilean-born, New Jersey native trapped in the Midwest. As a former climate-change skeptic, he feels a responsibility to try to correct some of the misgivings other skeptics and deniers have about the climate crisis.

During his time working as an associate project manager at OATI (the US’s largest electric industry software-as-a-service provider), he got to know many utility employees and technical experts who expressed concerns about their companies’ reservations in investing in renewable technologies. It was from conversations like these that he grew to appreciate the magnitude of the threat we face, as well as the opportunity in play here for businesses to develop in this changing market.

At OATI, Mateo became a subject matter expert in electric transmission and reliability reporting systems, and became familiar with some of the most widely used energy credit/transmission allocation systems being utilized by utilities to offset pollution within their jurisdictions. In addition, he has had experience working with professionals from nearly every regional balancing authority in the country, and is familiar with the reliability reporting processes utilized to watch over the North American grid.

Mateo shared he was interested in being on the Metro CERT Steering Committee because he wanted to see what other perspectives were out there. Mateo has worked with and for the Sierra Club thinks it is a great organization, but feels the various positions they’ve taken over the years can make it somewhat inflexible as an organization. He hopes his experience as a subject matter expert in transmission allocation and reliability reporting systems and procedures will be of use to the group. In addition, he is happy to share his skills in television production and journalistic backgrounds to help promote some of the Metro CERT initiatives.

Mateo is staying busy during this time. He is currently in the process of working with some software developers to map energy utility risk adversity across the US. In short, he’s attempting to ascertain how much wiggle room utilities feel like they need to justify their commitment to dispatchable resources for reliability concerns.

Mateo and his family have been directly impacted by COVID-19. His wife Krissy contracted COVID-19, so Mateo, his wife and son quickly put themselves in quarantine on a farm in Southern Minnesota.  Thankfully they are now fully recovered, and given that his wife has been able to continue teaching political psychology at the University of Minnesota remotely, they decided to stay in Fairmont for the foreseeable future.

When asked about an interesting or fun fact about himself, Mateo stated “I’m an open book and I tell people just about everything, so answering this question without getting too graphic may be a tall order.” He shared that he doesn’t usually get starstruck, but said he cried/sobbed the first time he met Margaret Weis (author of the Dragonlance fantasy series).

Clean Energy Resource Teams staff work across the state to help communities with their energy projects.

CERTs is a public-private partnership staffed by four organizations in Minnesota.

Our mission is to connect individuals and communities in Minnesota to the resources they need to identify and implement community-based clean energy projects.