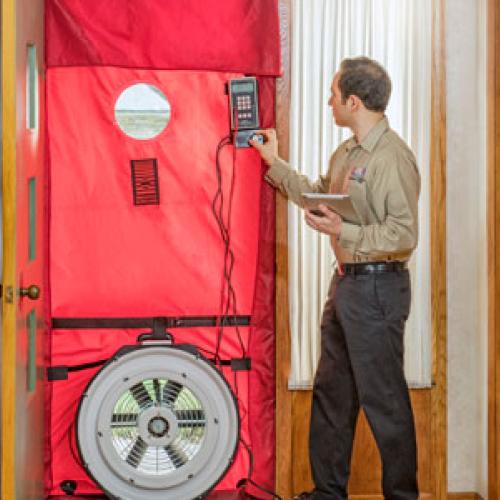 Safety. This is one of the unheralded benefits of a home energy audit, and a small Southeast CERT Seed Grant which helped fund 17 energy audits in Winona County led to the replacement of furnaces in two low-income households. The audits also included weatherization services and can be credited with reducing 7,500 kWh of electricity and 1,500 therms of natural gas use annually (enough electric savings for one year’s worth in the average MN home, and enough gas savings for two years).

“This not only saved money for the recipients,” noted Chris Meyer, Southeast CERT Coordinator, “but each dollar spent towards energy efficiency returns four dollars of benefits to the community by reducing the need for new energy infrastructure, reducing pollution, and supporting local jobs.”

Southeast CERT’s $1,000 Seed Grant contributed to a larger collaborative effort leveraging about $55,000 in grants and volunteer time to raise awareness about sustainability and clean energy issues across Winona County. Next Step Partners, the group working on the grant, grew out of interest generated by the Jefferson Center’s Winona County Climate Dialogue held in 2016 and is creating pilot programs related to energy and water including contests, educational sessions, and direct community action such as the energy audits.

Many of the energy audits in greater Winona County were provided by the Southeastern Minnesota Community Action Agency (SEMCAC). “SEMCAC performs audits, insulation, air sealing, and also tests a home’s mechanical systems for safety and efficiency,” said Melissa Feine, SEMCAC weatherization program organizer. It was in the furnace testing that two of the low-income audits triggered replacement by federal Weatherization Assistance Program (WAP).

In the city of Winona, partner Xcel Energy was also activated by the grant to extend the energy audits with 19 home visits by the utility’s Low-Income Home Energy Squad. These visits provided $200 worth of value in the form of equipment like LED bulbs, weather stripping, and low flow shower and faucet aerators plus a water-heater tune up and insulation inspection at no cost to the recipient. Pam Newell, Xcel Energy’s local Product Portfolio Manager, indicated that “the grant opened the door to make way for additional opportunities which saved enough energy to supply more than eight homes with their energy use for a year.” Newell said that many of these customers are still using incandescent bulbs and “so much of the savings is about replacing lights, since LEDs are now cost effective.”

Even though the low-income energy audit portion of the Next Step Partners work is done, folks who are interested can still participate in the group’s energy contest, water saving contest, and rain garden efforts by signing up at the Sustain Winona website. In addition, Winona is now participating in Xcel Energy’s Partners in Energy program and future Home Energy Squad visits will be available for Winona residents in the Xcel territory over the next year. Residents can learn more about the value of the visits and sign up.