When you think about communities providing clean energy leadership in Minnesota, who comes to mind? If Moorhead, Minnesota wasn’t on your list, it probably should be!

As of this month, January 2021, everyone in Moorhead—every business, every institution, every household—can claim their electricity usage is 100% carbon free through Moorhead Public Service’s purchase of renewable energy credits (RECs). To learn more, we talked to leaders at Moorhead Public Service and City of Moorhead.

If we can accomplish things that people do not think is possible, we change the way we think about systems.

Back in 1999, Moorhead launched one of Minnesota’s first “green pricing” programs—an effort to allow residents to voluntarily pay a little bit more for their energy to know it was from a renewable source. Not only did they offer this program, they did it through a wind turbine they put up right on the edge of town. Community members got to name it. There was so much interest, they built a second turbine, and community members named that one, too. For many, many years, the City of Moorhead’s municipal utility, Moorhead Public Service (MPS) has had one of the highest participation rates in their green pricing program of any utility in the country.

In 2013, when Minnesota passed its community solar garden legislation, MPS wasn’t required to adopt a program, but they did. They were one of the first municipal utilities in Minnesota to offer a program. They sited the first community solar garden at a local business. The business was proud to be a host, and it was also an opportunity for residents to participate in solar. They continued to build additional systems every year for six years. 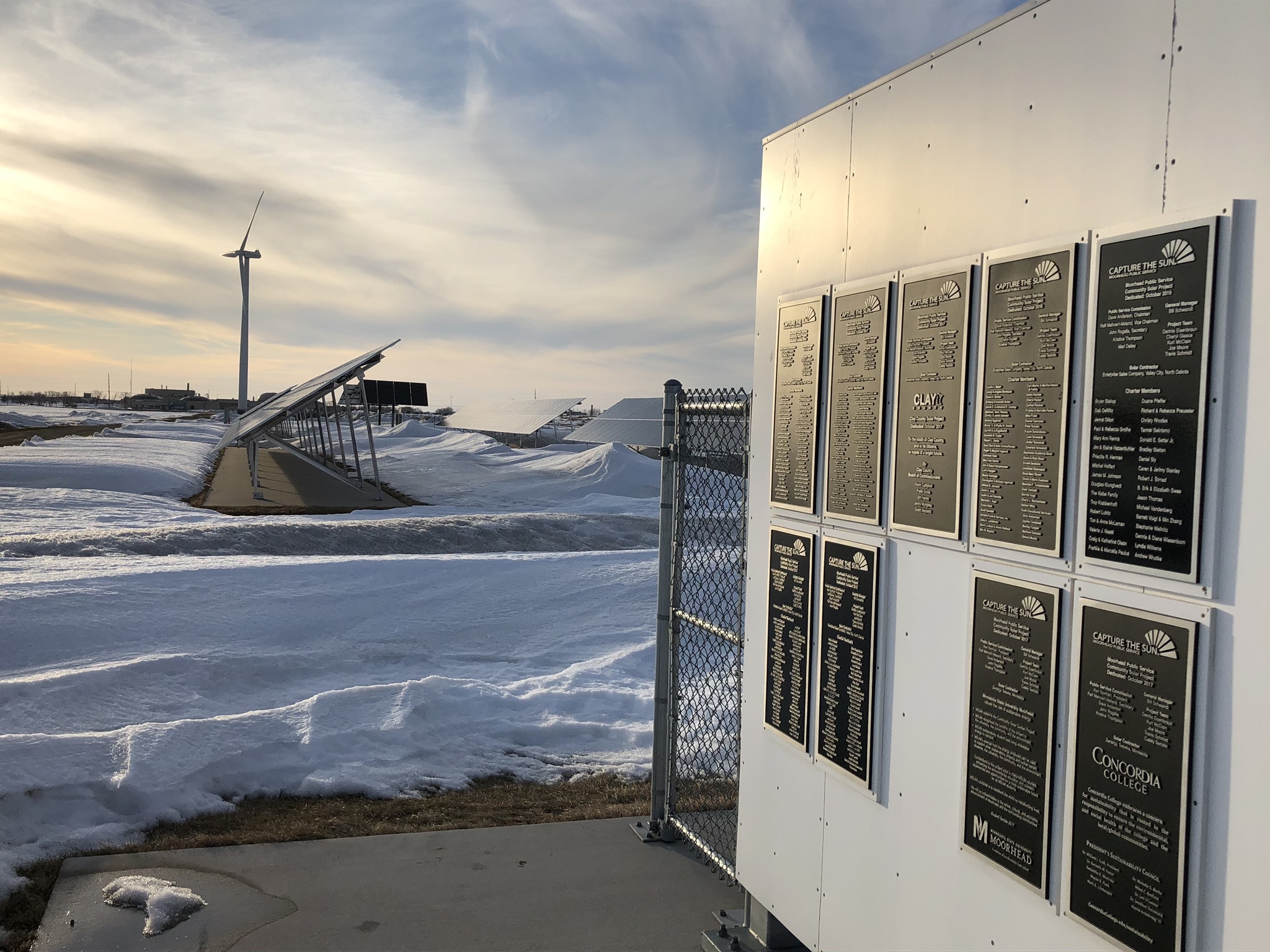 This sort of opportunity isn’t just low hanging fruit, this is the fruit on the ground.

In 2020, a new opportunity emerged. By partnering with their power supplier, Missouri River Energy Services, MPS learned they could affordably buy renewable energy certificates (RECs) to get the whole community to 100% carbon free. To be fair, they were well positioned. Moorhead’s energy mix was already 87% carbon-free thanks to hydro power and other renewables that power their system.

The shift was that they could now buy RECs for a tenth of a cent per kilowatt-hour. The purchase of RECs allowed them in effect to go carbon free for a year, for the whole community, for just $60,000. Dennis Eisenbraun of Moorhead Public Service, who has been helping advance renewable energy at the utility for years, said, “This sort of opportunity isn’t just low hanging fruit, this is the fruit on the ground.”

Moorhead City Manager Dan Mahli recalled his conversation with Dennis when he shared this was possible. He was excited, and so was the MPS Commission and the City Council. “This is a win for Moorhead,” he said. Travis Schmidt, the General Manager at MPS, said, “We don’t even have to raise rates to do this. It makes sense, and it’s not impacting anyone’s bills.”

We don’t even have to raise rates to do this. It makes sense, and it’s not impacting anyone’s bills.

This move is in keeping with many other efforts the City of Moorhead has been working to advance. Moorhead is a Step 3 GreenStep City working to move to Steps 4 and 5. They’ve been advancing a range of efforts, from a community garden to recycling byproduct methane gas to heat the city’s wastewater treatment plant, from building benchmarking for energy efficiency to encouraging walking and biking. Carbon-free electricity is another strong step forward on their sustainability efforts, and a real feather in their cap, providing leadership for what other communities could do.

And this is a big change. As of this month, January 2021, everyone in Moorhead—every business, every institution, every household—can claim their electricity usage is 100% carbon free. Many residents probably didn’t even realize this was doable. Reflecting on what this kind of leadership means, Mahli shared, “If we can accomplish things that people do not think is possible, we change the way we think about systems.”

CERTs is perfectly situated to add support and value to the services utilities are already delivering for their customers.

Buy Renewable Energy from Your Utility

Most utilities offer programs to buy wind or solar energy for a small premium as an easy way to be green.