Now in its 10th year, Minnesota GreenStep is a voluntary challenge, assistance, and recognition program to help cities and tribal nations achieve their sustainability and quality-of-life goals.

Diana McKeown, Metro CERT Director at Great Plains Institute, connected with Amanda Beckler, Community Education Coordinator, and Tom Hoff, Volunteer GreenStep Committee Member with the City of Marshall. Marshall has been part of the GreenStep program since 2012 (see their progress).

What action is the City of Marshall most proud of since joining GreenStep Cities?

Tom Hoff: The additions of paths, especially the paths from Marshall to Camden State Park and the bike lanes. Then Amanda, your work with the bike-loan program and bronze status for Bike-Friendly Community.

Amanda Beckler: Yes, the bikeshare program. So I’ve been with Marshall for a little over two years and one of the things that I would say—that I feel very proud of is getting that bikeshare program up and going and then also all the bike trails and everything we have throughout the community and it’s such a great asset for our community. The bikeshare program launched last year as of May 20th, 2019, and at that time we have nine Trek bikes that were out for public use. We were going to launch them, we were going to get them out, and then we had to pull them for this season due to COVID. But, we have plans for more bikes coming out; we have some 3-wheeled bikes coming out to meet the needs of the community. We’re very excited to be able to launch that next year, we hope. 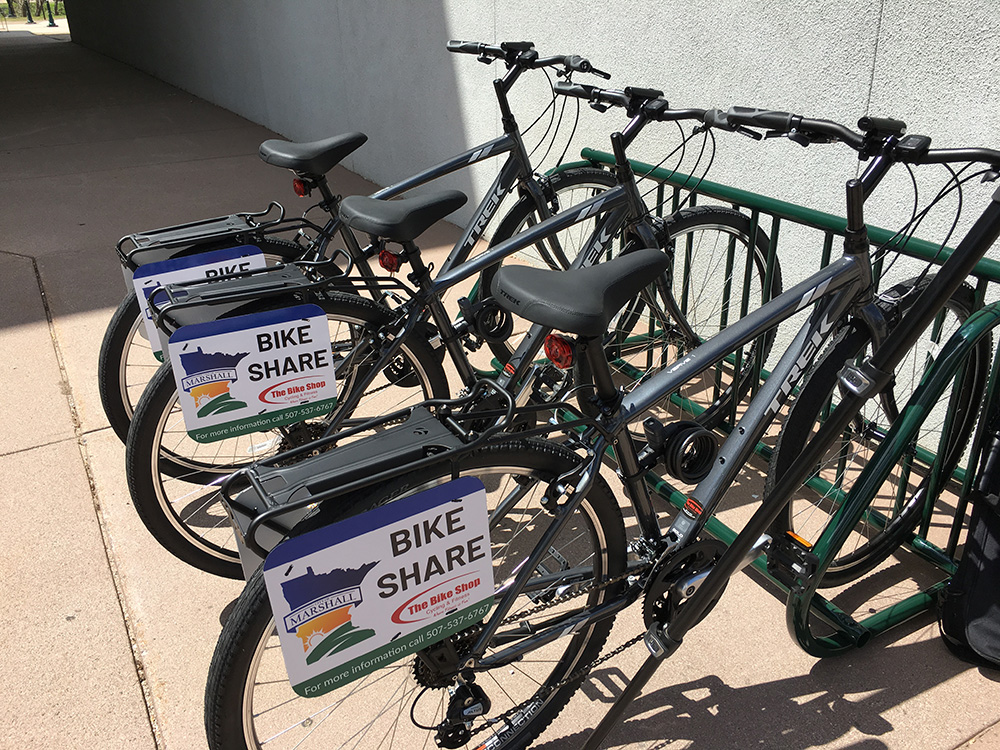 Amanda Beckler: I think another thing—and Tom you were a key player in it—is also the Healthy and Green Living Expo. I think it was a huge asset to the community as well in terms of the education and promotion side of healthy and green living and we never had anything like that in this community before. Between the Marshall GreenStep group and Healthy56258, there was a great partnership there. The partnership with Healthy56258 has been really key in implementing progressive initiatives such as the Expo. It’s fairly symbolic of how the Marshall community thrives in Southwest Minnesota.

Tom Hoff: The first year of the Expo we didn’t have the size of group we wanted; we also had a snowstorm that morning. We hope to continue and we had some obstacles and barriers that may be prevented from being as big as it could’ve been the first year, but generally speaking we think we had a great year. We were hoping to build on it from last year, but we had to pull the plug again due to the COVID outbreak—it was supposed to be in May.

If you didn’t have those GreenStep best practices out in front of you, I think it would be really hard to know where to start.

What has the GreenStep Cities program helped Marshall achieve?

Tom Hoff: Probably, generally speaking, it’s really nice to go through other communities’ Best Practice Actions—how they’ve achieved them, what they set up. I just think, when we’re trying to implement something or do something, to be able to see what other communities have done—and you can’t always replicate them completely because they’re different sized and maybe have different needs—but I think that has been really helpful once we try to figure out what our next steps are.

Amanda Beckler:  In addition to that, I think with GreenStep Cities, it’s been able to provide opportunities for partnerships and collaborations on different projects. I think also it’s been a great way to kind of see, from the city standpoint, the areas that maybe we should work on. One thing that comes to mind for me is the process of being able to work with our park staff, different things that maybe we need to focus on, or what are some different thoughts or takes that we can bring into those conversations from a GreenStep standpoint. For instance, I work with the Parks Department on different things and there are projects that they bring my way, like “what do you think about this.” Being able to look at those and then looking at the best practices and seeing where some of those things would fit in, I think has been a really great tool in helping others make decisions.

Tom Hoff: And we’ve had a number of communities reach out to us for different things as well that we’ve implemented—and not that we have it all figured out—certainly there’s room for improvement in everything we’re doing, but it’s been nice to have been able to offer some assistance though for communities as well.

Can you tell us about an example of sustainability in action that people can see or visit?

Tom Hoff: The pond by Red Baron Arena and that diverts a lot of water, and is used for irrigation for athletic fields. The Red Baron Arena is a B3-designed building and had to meet a lot of strict guidelines in order to be constructed in terms of waste diversion and energy efficiency. So those are big ones. I think our bike lanes which were mentioned, and our abundance of green space and parks and trees.

Amanda Beckler: In 2014 we were recognized as a Tree City USA, and then with the Red Baron Arena, on the efficiency side of it—they use the ice to cool the facility, too. That’s one that people can see but I think it also goes into the can’t see category. They don’t realize what that building can do. Unless you’ve toured it and worked there, you don’t know that stuff about it. That’s one of the things that’s really neat about that facility in particular.

Tom Hoff: I would also say the mattress recycling is a really unique addition for our county and community that you can see; how many mattresses are being diverted and the employment it’s providing for adults with disabilities.

Amanda Beckler: As well as the car seat recycling.

What about something that can’t be seen or visited but is important to your sustainability efforts?

Amanda Beckler: One thing that we do have is a Minnesota GreenCorp member starting in September and they will be focusing on a tree inventory. We do have that coming in that we’re really excited about, as well as helping with our Arbor Day celebrations and our city clean up events, so we’re excited to bring that individual in.

Tom Hoff: I think maybe all of the behind the scenes work that people can’t see when you’re organizing an expo or event, or just the planning it took when they launched the bikeshare program. I think those are all things that people don’t understand that a lot of coordination, a lot of work goes into these things.

Amanda Beckler: And a lot of looking for grants and resources and things like that to help assist with those programs.

Can you describe a barrier that you had to overcome to achieve a GreenStep Cities action?

Tom Hoff: Well, I think there are a couple. One is a comprehensive plan for the city. They’re currently collecting data and it is on the radar for renewal. I think ours had been updated several times, but really had not been gone through thoroughly for awhile. As a GreenStep Cities coordinator or committee member, you don’t always have the power to make those type of things happen—we’d like to see them happen. Fortunately we’ve got a progressive mayor and city council and administration and I think they saw the need for it, so I’m excited that’s taking place. The thing that was a barrier is that not everything you believe in is appreciated or agreed upon by everyone in the community—some people will dismiss things that you think are really important or vice-versa. You never get complete buy-in from everybody.

GreenStep Cities has provided opportunities for partnerships and collaborations on different projects.

Is clean energy and climate change a concern in your community?

Tom Hoff: I think Marshall has over 30% of all of its energy coming from renewable resources. We have a wind farm near town that supplies some of our energy—I think there’s hydroelectric that comes from South Dakota that helps supply some of our energy, so that’s been increasing over the years. We have one building with solar panels on it and then another by our auto-dealership that has a small solar field—so I think solar’s starting to grow a little bit.

Amanda Beckler: As well as the electric vehicle (EV) charging stations. We have the two at the liquor store and the Sleep Inn.

What GreenStep Cities actions is the City of Marshall planning on next?

Amanda Beckler: One of the areas that I’m working on right now is updating all of the B3 Benchmarking Report data and getting all of our city buildings up to date in that, which is a huge process to go through. I think another area that we’ve been talking about—with the GreenLiving Expo—is getting a little bit deeper in the education side of things. For instance, we’ve been starting the process of putting together infographics that can be handed out to the public—“what are the benefits of recycling?” and, “what about composting?” and “what steps could be taken?” and things like that.

Tom Hoff: Well I think back to the tree inventory, I mean part of the reason the urban forest is really important—with a lot of trees ash trees in this community we’re susceptible in many areas. I think that’s a big part of that whole tree inventory—is to really determine what types of trees we have and how to make us more diverse in that area. We have had conversations  around composting. Our county partner received some grant funds and they’re going to be purchasing a bunch of backyard composting barrels for people to use and provide some education on that, so I guess we’d be part of that.

Amanda Beckler: And another thing that comes to mind is—there’s conversations at this point looking at maybe trying to get some more native grasses and wildflowers within city limits for pollinator plots.

Would you recommend the GreenStep Cities program to other communities?

Tom Hoff: Yeah, I certainly would. I mean, I think we’ve visited with a couple of non-GreenStep Cities community leaders about it. I like the structure that it provides. It’s not mandatory, but it provides enough structure to help you maybe make decisions and to organize yourself and to maybe push yourself or challenge yourself in different areas. I think if you didn’t have those Best Practices out in front of you, I think it would be really hard to know where to start.

Amanda Beckler: I agree. They’re a good framework to work with or even just to go back on and look at where some next steps could come. It’s just a good outline of things to keep in mind.

Elk River is energized about sustainability

Crosslake on the crossroads of improving water quality

Grand Marais partners with youth to plan for climate action

Hutchinson a bright spot for sustainability in Minnesota

Get updates from Minnesota GreenStep