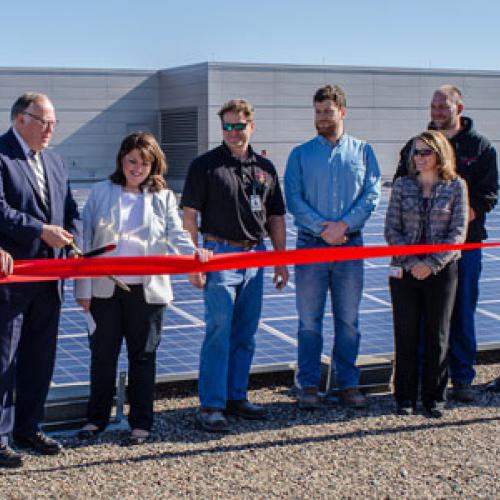 Electricity to the Minnesota Capitol complex is getting greener with the activation of the first phase of a large new solar array on the roof of the Minnesota Senate Building (MSB). The project, overseen by the Minnesota Department of Administration, was formally opened last month with a ribbon-cutting. Partners in the project include Mortenson Construction and Gephardt Electric, who installed the system, and Xcel Energy.

“The State of Minnesota is leading by example, working to increase renewable energy at the State Capitol to better protect Minnesotans’ health and our environment,” said Governor Mark Dayton. “Thanks to statewide, bipartisan efforts, Minnesota has already met our goal to generate 25 percent of our energy needs from renewable sources by 2025.”

The solar project consists of 414 twenty-one square foot panels that produce 133,000 peak watts of direct current power for the building. In addition, solar arrays are planned for seven additional sites on the Capitol Complex.

“This marks another example of how state government can lead by example,” said Administration Commissioner Matt Massman. “This project, combined with Xcel Energy’s Renewable*Connect Government program, means that the Capitol Complex will get a third of its energy from Minnesota renewable resources.”

The Senate Building was identified early in its design as an ideal candidate for a solar array because of its uninterrupted access to sunshine for all 12 months of the year. The facility was built “solar-ready,” — infrastructure for solar panels were included in the building’s original construction.

“Since the state’s electric utility bill includes a kilowatt hour charge based on peak demand, the solar array on the Senate Building will produce the most power just when power is the most expensive — the hot afternoons of the summer,” said Commissioner Massman. “This saves money, and reduces the stress on the electrical grid for everyone.”

The solar project helps state government meet Governor Dayton’s call for a 30% reduction in greenhouse gas emissions by 2025, along with a number of other sustainability goals. More solar installations in the Capitol area are on the drawing board.

“It’s an ambitious and wise agenda,” said Larry Herke, Director of the Office of Enterprise Sustainability in the Department of Administration, “that works to insure that the resources we use today are there for future generations, too.”