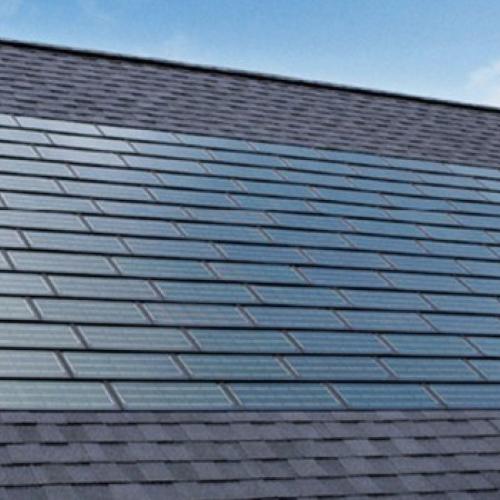 Are solar shingles a viable option in Minnesota?

Just as the Midwest has seen increases in on-site solar rooftop development, there’s been talk for several years about emerging solar technology as people become increasingly familiar with seeing roof-mount solar photovoltaic (PV). New on the horizon, through energy innovations from household names like Tesla and MIT, are things like Solar Skins and solar shingles, which are being included in conversations about the future of solar.

However, very few communities in the Midwest are thinking about solar shingles. Solar-readiness programs for communities, like SolSmart and Solar Possible–which help communities prepare for solar through best practices in zoning and permitting or help mitigate the soft costs associated with rooftop solar–still focus almost exclusively on ground mount and mounted roof systems. As we think proactively about the future of solar, we start to ask: what are these solar shingles all about and where might they make sense in an increasingly renewable landscape?

To get some local insights, we reached out to one of the few companies in Minnesota that is actively working on solar shingle installations, Litty Solar, to answer some questions on solar shingle technology and logistics.

What’s up with solar shingles?

Are they in use elsewhere?

Solar shingles are in use in many parts of the country and around the world. Major players in the energy technology sector are experimenting and designing different types of building-integrated solar technologies. However, just as roof-mount and ground-mount solar PV are more prevalent in the Southern United States, and in states with more progressive solar legislation, like California, so too are alternative solar technologies, like solar shingles, more common. In addition to known brands like Tesla, there are two major solar shingle manufacturers in the market: CertainTeed, who make the Apollo II, and RGS who makes the Powerhouse 3.0.

When do they make sense?

What else do you need to know about solar shingles?

The upfront cost of solar shingles is typically higher than roof-mount solar PV panels. The market for solar shingles, unlike more common roof-mount systems, is nascent in the Midwest. This means that there are few installers to choose from, and communities may be less familiar working with residents or businesses on any permits for the installation. Finally, weather is a consideration. Solar PV does run more efficiently in the cold. However, despite a handful of private residential installations across the metro, there is minimal public data on how solar shingle technologies operate during Minnesota winters. There is also some concern about reduced efficiency in the summer months, as the solar shingles lack air flow underneath (unlike a racked roof-mount system) which can help the module stay cool.

So, what do the economics look like for a typical homeowner?

Understanding that the cost of any solar system–roof-mount or shingles–will vary dramatically based on a suite of factors like size of roof, aspect, color, slope, material, etc., we asked Litty Solar to break down the financials and explain what a solar installation looks like for a regular PV system versus solar shingles.

The roof upgrade or replacement stays the same–although thinking about timing a solar install with a roof upgrade may make sense. The system costs for the solar shingles are more expense than a regular PV system. However, the ITC tax credit is where the solar shingles could make up some of that cost. The final range shows significant overlap, identifying that solar shingles may not be as cost prohibitive as their initial cost would appear.

Thinking about the future of solar, there may be increasing applications where existing barriers to on-site solar–like homeowners associations, building or roof restrictions–can easily be mitigated by alternative solar technologies like solar shingles.

Learn the basics about solar energy and the options you have to be powered by the sun.

Assess a Site for Solar Suitability

Use this mapping tool to find out if any location in Minnesota is a good site for solar.